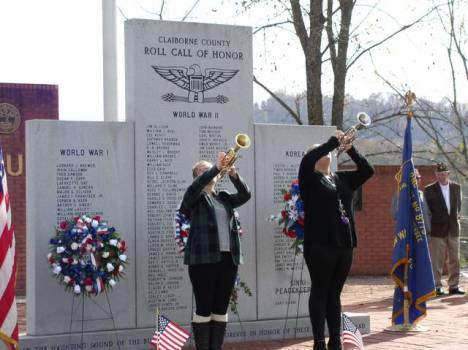 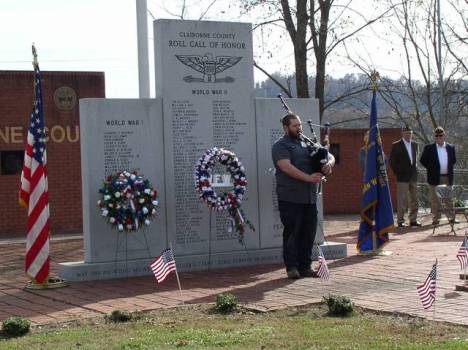 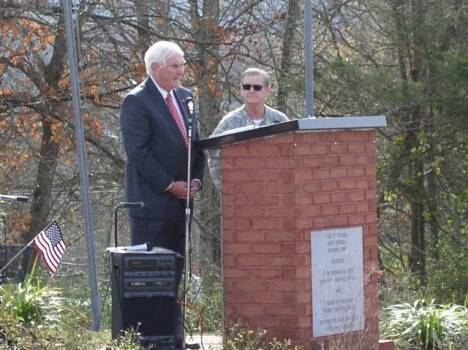 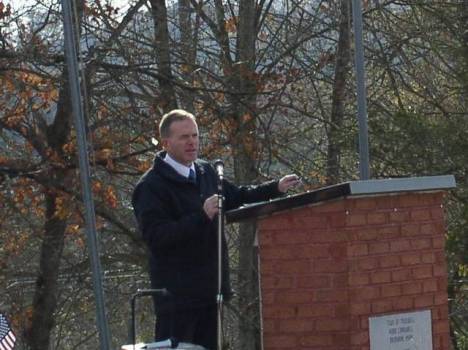 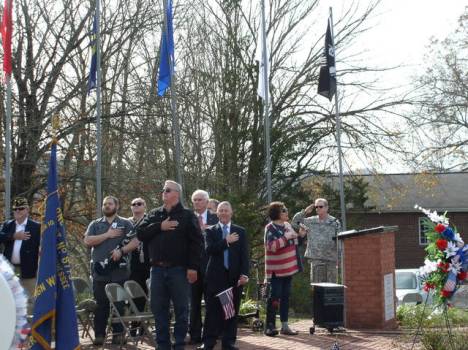 <p>Jan Runions | Claiborne Progress</p> <p>Janice Derreberry sings the “Star Spangled Banner” as others honor the flag, during the Veterans Day ceremony on Saturday at the Rome Cardwell Memorial Park in Tazewell.</p> 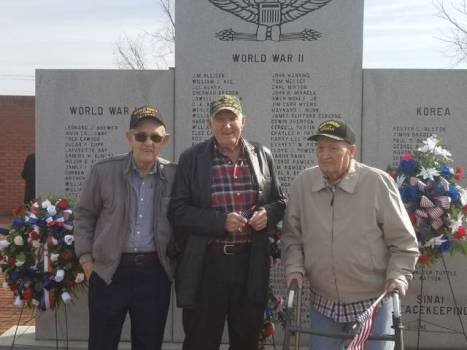 The Veterans Day ceremony on Saturday offered something new this year, with the addition of two buglers who performed a live version of ‘Taps’ followed by a third who used the bagpipes to express a moving rendition of the spiritual song ‘Amazing Grace.’

Tazewell Mayor Bill Fannon said he had asked the three musicians to participate in the ceremony after hearing them the day before, during a Veterans Day event at Claiborne High School.

During his brief time at the podium, U.S. Congressman John Duncan said he could not recall ever hearing the last stanza of the “Star Spangled Banner” during a patriotic event, until now. Local musician Janice Derreberry had opened the program with the anthem.

Duncan quoted two lines of the stanza which states “Then conquer, we must, when our cause it is just; And, this be our motto — “In God is our trust.”

“That’s what this country is all about. That’s what’s made this country better than any other. There are other countries that have more gold, more oil than we do. This country has become the most prosperous and greatest country in the world because we have not relied on the government to do everything for us.

“But, in some ways, we’re losing a little bit of freedom, each year. The first plan of the communist manifesto is to do away with private property. Every year, government takes more property. I just read this week that the Chinese countries now own farmland totaling 27 million acres in this country. Twenty-seven million acres is the size of the whole state of Tennessee,” said Duncan.

He said we, as a country, use the word ‘hero’ too lightly.

“Every person who has served honorably in the U.S. military deserves respect. But, very few deserve the word ‘hero.’ But, every name over there is a true hero of this country,” said Duncan, as he pointed to the Wall of Honor.

He said he was very proud to represent one of the most patriotic areas of the nation.

The keynote speaker, veteran and Circuit Court Judge John McAfee, spoke of his uncle’s service as an infantryman in the European Theatre during World War II.

Tip Venable arrived in Europe on Jan. 14, 1945 and was immediately thrust into battle. Less than one month later, the infantryman lost the lower part of his right arm during a massive German artillery barrage near the Rhine River, said McAfee.

Venable returned to the states on March 8, and would remain hospitalized until his discharge in mid-September. He then returned to Claiborne County to marry the ‘love of his life,’ Lilly, and spend his days farming.

“Although my uncle lost his right arm, he never allowed that to slow him down. He adapted to his circumstance and has lived a normal and blessed life,” said McAfee.

As a Christian nation, he said we will always be a guiding light for freedom throughout the world.

“I think sometimes of Gen. Matthew Ridgeway who, the night before D-Day, unable to sleep, talked to the Lord and listened for the promise that God made to Joshua — ‘I will not fail thee nor forsake thee,’” said McAfee.

Approximately 16 million Americans served during World War II, about two million of that number in Europe. Roughly one-half of those who served had ‘contact’ with the enemy. About 405,000 U.S. service members died during that war, many of whom were stationed in Europe.

Some 670,000 who served were wounded, with many permanently disabled.

All who have served, he said, are owed a debt we can never repay.

“We have a responsibility to remember those who served, those who were wounded and those who have died. That is why we gather here today, to honor and remember.

“As my uncle lives in the twilight of his life, I especially ask that you remember him and all other members of this greatest generation,” said McAfee.