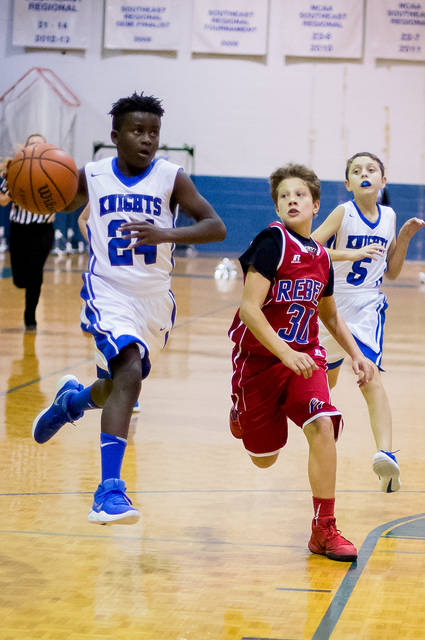 Ben Hamilton drives to the basket for the elementary school JFWA Knights.

The J. Frank White Academy elementary students did battle on the hardwood against the Fairview Rebels Nov. 16 in Harrogate.

The visiting Rebels came out strong with a 12-point run and got the Knights behind on the scoreboard after one period of play, 12-3. The Knights found their offense during the second and scored six points but gave up nine. At the half it was a 19-9 Rebels advantage.

During the third period the Rebels again put 12 points on the scoreboard and the Knights managed only two. An 11-6 fourth period sealed the win for the Fairview Elementary team and they took home a 42-17 victory led by Brady Strunk and his 11 points.

Ben Hamilton was the bright spot for the Knights as he led his team and all scorers with 15 points. Samuel Rhodes and Dalton Brown rounded out the Knights scoring total with one point each.