Santa Claus is coming to town! 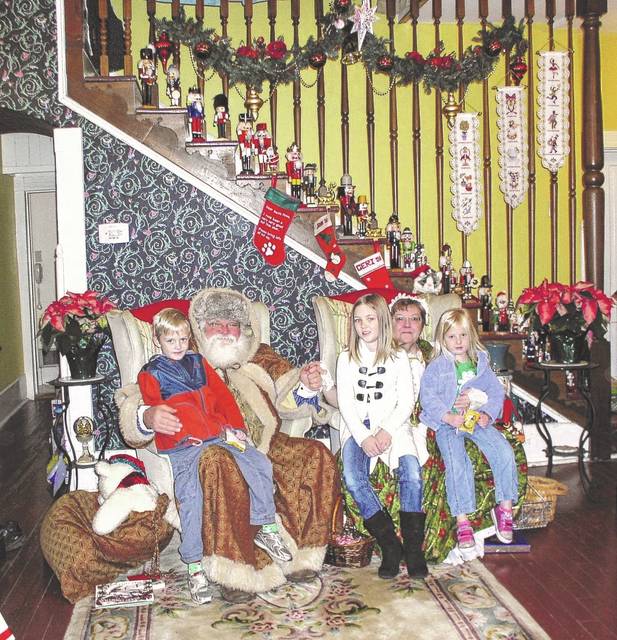 Jolly Ol’ St. Nick is planning a month-long trip to the Gap, as all good boys and girls prepare for his arrival, slated each Friday and Saturday evening, Dec. 8 through Dec. 23, from 6-9 p.m. Here are Santa and Mrs. Claus with some children from a previous Victorian Christmas in the Gap.

Santa Claus is preparing to partake in a special month-long visit inside the historic town of Cumberland Gap, and everyone is invited to take part in the festivities. Town folk are encouraged to ‘Light up the Gap’ daily from 6-9 p.m., creating a winter wonderland to share the Christmas Spirit with everyone.

The Gap magic begins with the popular annual visit from Father and Mother Christmas, as a Victorian Christmas gets underway at 10 a.m. on Dec. 2. Holiday cheer will continue each Friday and Saturday evening, from Dec. 8 to Dec. 23, as visitors to the Gap enjoy a little one-on-one time with Jolly Ol’ St. Nicholas, himself.

Special events, courtesy of the Cumberland Gap Artists’ Cooperative, will be peppered throughout the holidays. Just some of these events include the official lighting of the town Christmas Tree and special music by wandering carolers.

In other action, the Gap was approached during the November Planning Commission meeting with a proposal to remodel Festival Park. The remodel would include the installation of a statue of Daniel Boone.

The town planners were unaware, at the time of the initial proposal, of a similar plan being negotiated in nearby Middlesboro, Kentucky, by the same group.

During the regular monthly board of Mayor and Aldermen (BMA) meeting, it was determined that the proposal is “no longer valid,” due to the proximity of the Middlesboro project.

The town had postponed plans, during initial discussions of the proposal, to move forward with the planting of trees in the park. Now that it looks as though a remodel will not be forthcoming, the BMA decided to go ahead with bidding the purchase.

The waterline rehabilitation project is underway, with the installation of 24 new lines and meters. A bonus of the project is the discovery of several water leaks, which can now be addressed by city maintenance.

The Gap Fire Station will soon be in receipt of a 34 case gear, courtesy of the Reston, Virginia, Fire Department, who recently informed the town of the donation.

The creek bank, located on Llewellyn, is in bad need of repairs. It looks as though Sanders Hauling, who turned in a quote of $2,300 for the project, will be doing the job.

The BMA adopted, on second and final reading, ordinance 9-2017 amending the 2017-18 budget. The document allows $3,000 in matching funds to be included in the town budget to cover its portion of a grant to create a Ten-Year Parks and Recreation Comprehensive Master Plan.

The Berkau Park restrooms have been freshened up with a coat of paint and repairs to the roof. The town will be installing new toilets and gutters to the structure, later this month.

MEDIC in dire need of blood; less than 2-day supplies of some types