Claiborne drops both games on day 2 of tourney 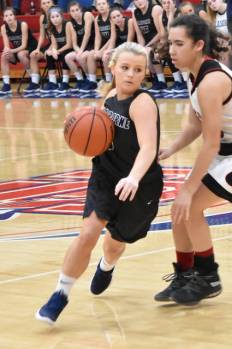 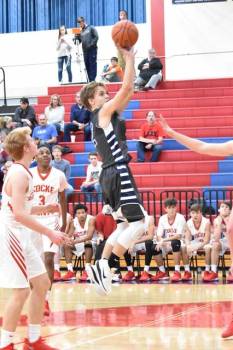 <p>Allen Earl | Claiborne Progress</p> <p>Kade Beeler hangs in the air and gets two of his 13 points.</p>

Claiborne’s Lady Bulldogs opened up the second day of the Union County Discount Pharmacy Thanksgiving Classic shooting as cold as the previous night against Anderson County. The Cocke County Lady Red opened up a 8-0 advantage before the Lady Bulldogs responded. After one period of play the Lady Red led 12-5.

The turnover bug bit the Lady Bulldogs during the second period but Cocke County was not ready to capitalize on the chances. They did make use of their free throw chances to advance their scoring total. Claiborne used a late second period bench warning to get fired up and pull to within nine points at the half 23-14.

Claiborne scored the first basket of the third period but it seemed to put a fire in Cocke County. They ran their advantage out to 44-23. During the final period, Claiborne shot better but still fell 51-27. Leading the Lady Red in scoring was Mallory Clevenger with 16. Claiborne was led by Cheyenne Tolliver with 10, Emma Beason dropped in seven, Valoree Rouse had four, Lucy Shockley and Kelsey Munsey both dropped in three points.

The Claiborne boys battled Cocke County as well. During the opening period, Claiborne was down 6-0 but couldn’t get any closer than three points. At the end of the opening period the score was 18-10. Turnovers plagued the Bulldogs at the start of the second period and allowed Cocke County to roll on out ahead. At one point in the second period the Bulldogs were down by 15 points but when the half ended the score was 35-25.

Claiborne scored the first four points during the third period and looked like a more aggressive team. With 3:29 left in the third the Bulldogs were again down by 10 in a back and forth contest. At the end of the third the score was 51-42. The beginning of the final period belonged to Cocke County as they quickly made it a 14 point game. The Bulldogs battled until the very end but when the seconds had ticked away Cocke County had the win at 74-56.

Kade Beeler led the Bulldogs with 13, Houston Hatfield had 12, Elijah Beason had seven, Jacob Williams and Lucas Manning had six, Daniel Atkins dropped in five, Ethan Poore had three and Hunter Rosenbalm finished with two points. Cocke was co-led in scoring by Kaynajh Swann and Alex Overholt with 15.