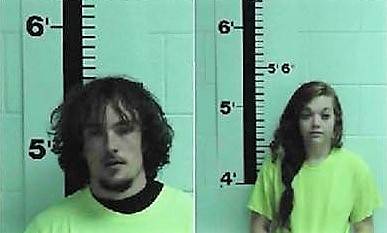 Michael Jason Gilbert, left, and Kayla Lynn Johnson have been arrested in connection with attempted murder of a Claiborne County commissioner, as well as the alleged burglary of his home.

Two people were jailed last week after allegedly breaking into a Claiborne County commissioner’s home and shooting at him.

According to a news release from the Claiborne County Sheriff’s Office, Second District County Commissioner Bill Keck returned to his residence the morning of Nov. 27 to discover that two individuals had broken into his home.

“One of the individuals has been identified as Michael Jason Gilbert,” the release stated. “The second individual is believed to be a white female.”

Officers responded to the Sharps Chapel area, where Keck had pursued the two after they allegedly shot at him and stole his truck, a 2001 Chevrolet Silverado.

Det. Bradley Duncan, the lead investigator on the case, along with Det. Tammy Reagan and Sgt. Chris Cardwell, went to Keck’s residence to process the scene for evidence and any clues that might lead to the identification of the female suspect, the release stated.

CCSO officials searched for Gilbert, of Tazewell, and put out a public plea for assistance. He was apprehended Nov. 28 with the assistance of the New Tazewell and Tazewell Police Departments.

Kayla Lynn Johnson, 20, an associate of Gilbert’s, was also detained for questioning and both were interviewed by CCSO detectives, an additional release states.

Following these interviews, Johnson was also charged as the second suspect in connection with the burglary of Keck’s residence.

They were both arrested and taken to the Claiborne County Jail where they were being held on $1,000,000 bond each.

Johnson is charged with attempted first-degree murder, possession of a firearm during the commission of a dangerous felony, aggravated burglary and theft of property ($2,500 – $10,000).