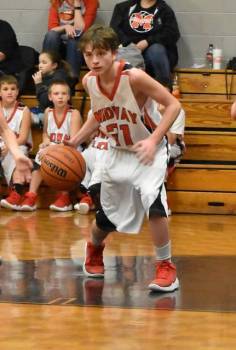 <p>Jake Smith led all scorers on the night with 16 for Midway.</p> 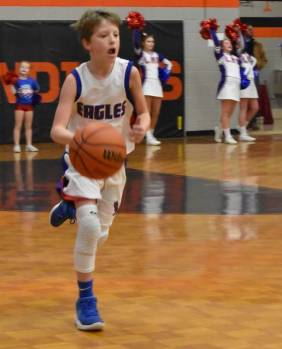 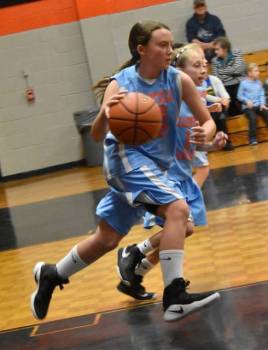 The Dec. 11 opening game featured the Lady Red Devils from Midway and the Soldier’s Memorial Middle School Lady Blue Devils. The Lady Devils opened up a 4-2 advantage after one period of play. Midway couldn’t find the basket in the second period but SMMS didn’t run away on the scoreboard either. After one half of play the score was 8-2 with SMMS still leading. The Lady Blue Devils added two points during the third to lead 10-2. Going into the final period it looked as if SMMS had this game at hand and although they likely didn’t need many points they placed six on the board early during the fourth. The final was 16-5 with SMMS getting the win. Leading SMMS in scoring was Genesis Bailey with 12 points. Two others scored two each Emma Ray and Daisy Bailey. Midway was led by LeeAnn Posey with five.

Game two was a boy’s contest between Powell Valley and Midway. Midway started scoring quickly and had an 8-2 lead on the Indians after one period. Midway was locked in to the basket during the second as well and led 18-7 after two periods of basketball. The third period was one in which both teams found their shooting strokes. Powell Valley played great defense and used rebounding to chip away at the lead but Midway stayed 10 points ahead most of the period. After three periods the score was 25-16. Midway finished the game strong and took the victory by the final score of 35-19. Jake Smith led Midway with 16, Korbin Hatfield and Elliott Hubbard both had seven and Tyler Epperson finished with four points. Andy Osborne led the Indians with eight, Trent Jenkins had six, Kaleb Powers had three and Gavin Owens finished the total with two points.

The final game of opening night belonged to Forge Ridge’s Dragons and HY Livesay’s Eagles on the boy’s side of the bracket. Livesay put four points on the board and at the 2:43 mark led 4-0. The Dragons placed points on the board at the 1:06 mark and after one period the score was 7-2. Both teams scored the basketball well during the second period and when it was over the Eagles led by 10 at 18-8. The Eagles opened it up a little during the third period while the Dragons’ scoring fell off a little. After three periods Livesay led 31-10. The fourth period went by fast due to a running clock since the lead was over 20. Livesay finished the game with the win by the final score of 31-13. Livesay was led by Lane Bunch with 15, Hyrum Hinckley and Evan Thomas both had six and Eli Patterson had four points. Nick McKorkel and Cole Adams led Forge Ridge with four each, Isaac Brown had three and Memphis Houston finished with two points. The winners moved on to second round action.