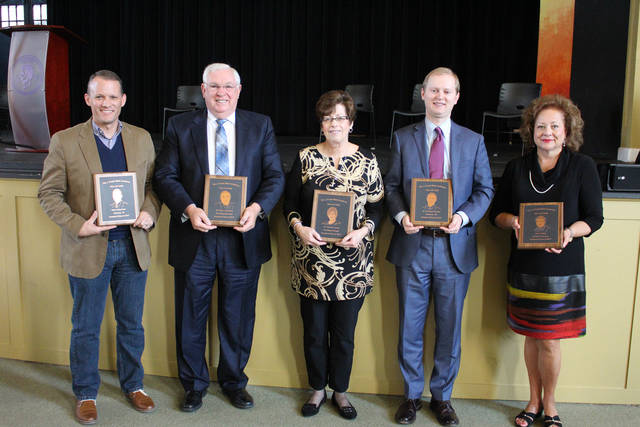 The inaugural class included Dr. Gary Burchett, Dr. Sylvia Lynch, Dr. Autry O.V. “Pete’ DeBusk, Adam Robertson, Dr. Payne Stanifer and Jim Whitt. These individuals are integral to the founding of the college preparatory school, visionary leaders guiding the future of the school, distinguished alumni and treasured faculty. The Hall of Fame was established to celebrate the history and heritage of JFWA.

Burchett, president emeritus, led the establishment of JFWA in 1989. Then president of LMU, Burchett embraced J. Frank White’s vision for a private high school in Claiborne County. A generous gift from the White estate funded the renovation of DAR Hall, home of JFWA from 1989 to 2014, and paved the way for the school’s opening. As the second vice chair of the executive committee of the LMU Board of Trustees, Burchett continues to help guide JFWA’s future.

Lynch served as the Academy’s founding principal from 1989-1993 and again from 1995-1996. She and the inaugural faculty taught the school’s first classes in LMU’s Carnegie-Vincent Library while construction was completed on the Academy’s first home in DAR Hall. Lynch guided the school through infancy, earning accreditation from the Southern Association of Colleges and Schools (SACS) and growing its enrollment from 27 to over 100 students. She left JFWA to pursue other career opportunities within LMU. In 2006, she returned to her original post, leading the school until 2010 when she left to serve on the faculty of LMU’s Carter and Moyers School of Education. Lynch currently serves as dean of the School of Education.

DeBusk, chairman of the LMU Board of Trustees, brought JFWA into a new phase of prosperity, leading the project to repurpose Farr-Chinnock Hall into a state-of-the-art facility for JFWA. The former home of undergraduate math and science programs located on LMU’s Quadrangle underwent a year and a half of renovations and opened its doors as the Academy at the start of the school year in August 2014. DeBusk continues to champion JFWA as the architect of a master plan that includes substantial growth over the next decade.

Robertson, a 1992 graduate, was among the first students to enroll at JFWA. He played baseball, basketball and ran cross country and graduated as the salutatorian of his class. Following JFWA, Robertson graduated from Belmont University in Nashville in 1996 and completed the Graduate School of Banking program at Louisiana State University in 2005. He currently serves as president of Commercial Bank, based in Harrogate, Tennessee, with 23 locations in Tennessee and Southeast Kentucky. A proud supporter of JFWA, Robertson is an active volunteer and booster. His daughter, Olivia, became the first legacy student in 2014, when she enrolled as a freshman. His son Noah is also an eighth grader at the school. Robertson and his wife Cindi, who is JFWA’s cheerleading coach, reside in Harrogate.

Stanifer, a 2000 graduate, has gone on to distinction as a thoracic surgeon at Columbia University Medical Center in New York. While a student at JFWA, Stanifer ran cross country, played soccer and was his class salutatorian. He qualified for state in cross country twice. In 1999 he was TSSAA Region 1A/AA cross country champion and placed fifth in the 3200 in the state track championship. He holds the school record for 3 miles (16:29) and the 3200 (10:17). Following graduation, Stanifer earned an undergraduate degree from William and Mary. He graduated medical school from the James H. Quillen College of Medicine at East Tennessee State University where he was a Quillen Medical Scholar. He also was a summer research fellow at the National Institutes of Health while in medical school. He completed a general surgery residency at Dartmouth-Hitchcock Medical Center and Dartmouth Medical School in New Hampshire and is board certified in general surgery. While at Dartmouth, he obtained a Master of Public Health degree from Harvard with a focus on management and health policy. He completed a fellowship as the chief fellow in thoracic surgery at Northwestern University in Chicago, Illinois.

Whitt, an LMU alumnus and lifelong educator from Lee County, Virginia, came out of retirement to help when JFWA was in need of a Spanish teacher in 2005. He quickly developed an affection for JFWA and his students and agreed to continue in the position for three years until his health declined. Whitt passed away in 2011. In 2016, LMU dedicated the University’s new Bell Tower in honor of Whitt’s lifelong dedication to education. His widow, Cynthia Whitt, spoke of two of his former Academy students — Zachery Greene and Robert Thomas who now teach at JFWA — with great fondness of his lasting influence on their lives.

The Hall of Fame plaques will be displayed on a wall inside the entrance of the school. Each year, more notable JFWA alumni, faculty and friends will be recognized at homecoming events, according to Jarryd Boster, JFWA principal.