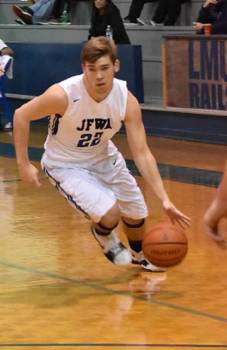 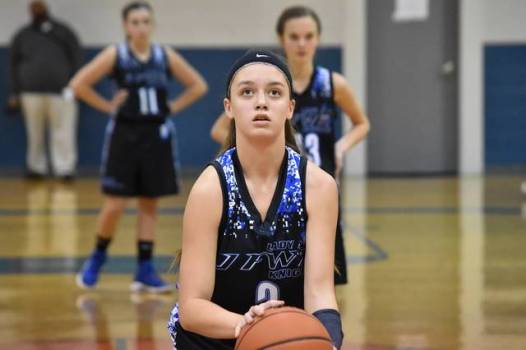 The second day of the 2017 JFWA Holiday Classic, Dec. 21, featured the Sunbright Lady Tigers and the Lynn Camp Lady Cats.

Sunbright opened up in a pressure defense and had a 4-2 run to begin the first period. The Lady Cats got a run of their own as a result of their good defense and after one low scoring period Sunbright led 9-6.

The defense remained tight and the scoring low as Sunbright stayed in the lead for the majority of the second period but Lynn Camp tied it at nine and again at 11. Sunbright moved ahead by four at the 3:36 mark and went on to a halftime lead of 18-14.

Sunbright pulled out a little at the start of the third and continued placing points on the board finishing the third leading 31-19. It was more of the same from Sunbright as the Lady Tigers kept the pressure on and the scoreboard moving. Sunbright won the contest 41-25. Lauren farmer led Sunbright in scoring with 16. Lynn Camp was led in scoring by Bradi Coe with 10 points.

Game two featured the Pineville Mountain Lions versus the Oneida Indians. These two teams started off with a 5-5 tie before Oneida made a run to make it 11-5 after one period of play. During the second period, Oneida stayed out front by seven as the period was winding down. The Indians led 21-16 at the half. Pineville kept playing hard, and by the 2:33 mark in the third period were down by only three. At the end of three periods fans were watching a one point game at 30-29. Pineville took the lead by one at the start of the fourth period and rolled on out to a four point lead before Onieda cut it to two. By the 1:13 mark, the Indians were down by one at 39-38 and couldn’t quite regain the lead and lost by the final score of 46-40. Pineville was led by Josh Lawson with 13 and Oneida was co-led by Dante and Elijah West with nine each.

The final game of day two featured the Knights and the Sunbright Tigers. This game was different than the others as the offenses were doing work. Unfortunately for the Knights fans in attendance it was the Tigers who assumed the first big lead of the game at 22-10 after one period of play. The Knights had a few empty possessions to start the second period but the Tigers put up points almost every trip down the court. The Tigers kept shooting the basketball well and finished the first half with a score of 46-21. Sunbright added to their total a little slower than in past periods but still were able to finish the third period leading big, 65-37. Just minutes into the final period the Tigers had a 30 point lead. The Knights played hard but fell by the final score of 77-58. Wes Bohanan led the Tigers in scoring with 20 and John Freels finished with 14 points. JFWA was led by Jake Gross with 23 and Jacob Yeary with 10.

The Holiday Classic continued through Dec. 23.