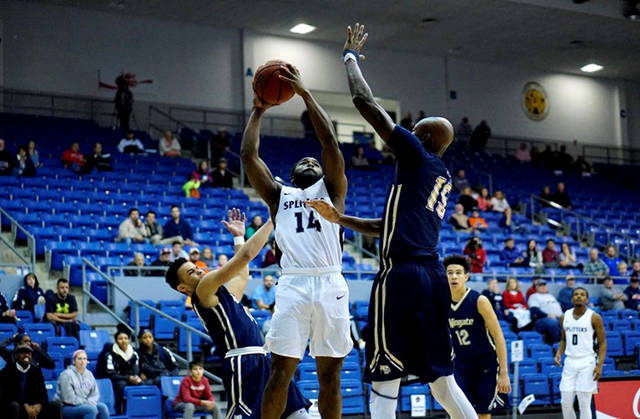 Trevon Shaw scored six points in LMU’s 70-56 loss to Northwest Missouri State. It marked the first loss the Railsplitters suffered since losing to the same team in the NCAA Final Four last season.

OWENSBORO, Ky. — A dominant start to the second half propelled No. 1 nationally-ranked Northwest Missouri State (11-0) to a 70-56 win over the No. 4 Railsplitters (11-1) in a rematch of the 2017 national semifinals last Tuesday night at the Owensboro Sportscenter.

The loss was Lincoln Memorial’s first since losing to the Bearcats 79-67 in that Final Four matchup, and just the second loss for the Railsplitters in their last 17 games.

After making a run in the closing minutes of the first half to cut the deficit to just four points at the break, Lincoln Memorial watched as Northwest Missouri State strung together two 12-0 runs and a 27-4 flurry in total to open the second half.

The Railsplitters trailed by as many as 27 points and by at least 20 points for most of the remainder of regulation after that, but ended the game by scoring nine unanswered points to trim the margin substantially.

“We got our butts kicked in every possible way. Northwest Missouri State dictated the whole game,” said LMU head coach Josh Schertz. “They played harder, smarter and more competitively than we did. We took a lot of tough shots early in the clock and turned the ball over trying to play in crowds. Then when things didn’t go our way we deflated and lost our fight.

“Ultimately we have to be more disciplined in our execution on both ends of the floor and that falls on me to do a better job with that. We aren’t going to win many games playing and coaching like that so we all have to better moving forward.”

Despite a 5-for-19 effort from three, the Railsplitters shot a respectable 52.2 percent against one of the nation’s stingiest defensive units. However, Lincoln Memorial matched a season-high mark by turning the ball over 17 times, leading to 26 points for the Bearcats on the other end.

Northwest Missouri State shot just 42 percent, but attempted 13 more shots due in large part to those 17 LMU turnovers as well as nine offensive boards. The Bearcats also cashed in 11 3-pointers while going 9-for-13 at the charity stripe.

The Railsplitters led on just two occasions, grabbing a 12-11 lead on a pair of free throws from Dorian Pinson with 12:32 to go in the first half and assuming a 14-13 lead on a dunk from Emanuel Terry at the 11:13 mark.

However, the Bearcats grabbed the lead for good with 10:41 left in the half on two free throws from Chris-Ebou Ndow, who carried the defending national champions with 24 points and 15 rebounds over the course of 37 minutes.

The Bearcats would extend the lead to as many as 13 points in the first half until eight straight points from Cornelius Taylor, who led the Railsplitters with 15 in the game, trimmed the deficit to 29-24. Another bucket from Taylor with just 23 seconds left helped Lincoln Memorial go into the half trailing by a slim 32-28 margin.

However, Northwest Missouri State put the game away early in the second half with a dominant display on both ends of the court. After a bucket from Terry made it a 35-30 game, the Bearcats scored 12 unanswered points paced by seven from Ndow to assume a 47-30 cushion. Josh Odem briefly stopped the bleeding with a jumper, but the Bearcats went on another 12-0 run after that to build a commanding 59-32 lead with less than 12 minutes to play.

The Railsplitters would trail by 20-plus points for all but the final two minutes of regulation after that explosive stretch by the Bearcats. Two straight dunks from Terry in the final 70 seconds capped Lincoln Memorial’s 9-0 closing run to cut the final margin to 14 points.

But Ndow and the supporting cast picked up the slack for Pitts. Along with Ndow’s 24 points and 15 rebounds, Brett Dougherty had 14 points and Joey Witthus contributed 12 points, which was more than enough offense to power the Bearcats to their 46th win in their last 47 games.

Taylor was one of three players to record double figures for the Railsplitters. Terry produced 12 points and five rebounds on 6-of-7 shooting, while Pinson posted a double-double with 10 points and a team-leading 12 rebounds.

The Railsplitters will break for the holidays before returning to action on Dec. 30 with a trip to Hickory, North Carolina, to face the Lenoir-Rhyne Bears in SAC action tipping off at 4 p.m.