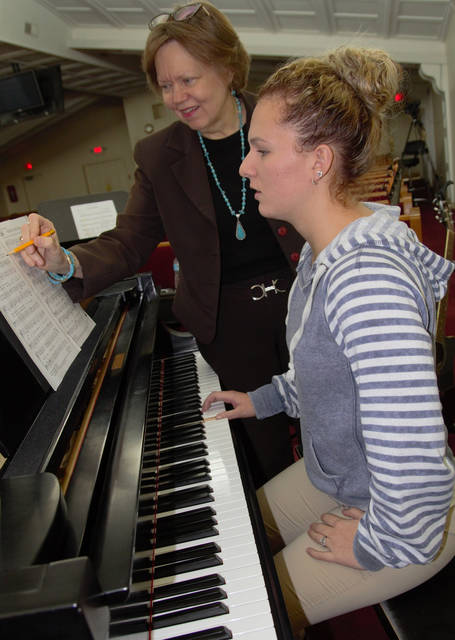 PINEVILLE, Ky. — If Carmela Bartels has her way, the day the music died will never arrive in the hills of Appalachia, a region that has produced the likes of Loretta Lynn, Wynonna and Naomi Judd, Ricky Skaggs, Tom T. Hall, Billy Ray Cyrus, Patty Loveless and Dwight Yoakum.

Bartels, a former international missionary, is teaching music in the heart of Appalachia, working through Clear Creek Baptist Bible College, trying to alleviate a growing shortage of musicians and ensure the sweet melodies that have been a part of church life here for generations do not fade away.

Pianos are falling silent in growing numbers of churches across rural Kentucky. As older musicians pass away, too few young ones are rising up to replace them. By some estimates, hundreds of Kentucky churches have no instrumentalists and hundreds more will soon join them.

“Churches have traditionally benefited from the music education programs of local schools, but those programs have been slashed amid lean budgets,” said Jason Stewart, worship and music strategist for the Kentucky Baptist Convention. “As financial resources shrink, schools tend to shift money from fine arts to the three R’s, and we’ve been seeing that happen for quite a while.”

Stewart, who estimated about 400 Kentucky Baptist churches across the state currently are without musicians, said the popularity of youth sports also has been a factor.

“Youth leagues for basketball, baseball, football, soccer, archery, you name it, have skyrocketed in this generation, robbing children of time that in the past would have been invested in learning to play musical instruments,” he said.

Small churches have been hit hardest. In fact, many of them are finding it easier to recruit ministers than musicians.

At New Hope Baptist Church in West Liberty, the wooden cover is drawn shut on an upright piano that’s polished to a shine. Pastor Willie Dybas longs for the day when a pianist is back at the keys. For now, he downloads music and plays it through a pair of speakers on each side of the pulpit.

Dybas, however, sees the day coming when his church will again have the benefit of live music; one of his teenage church members has begun piano lessons.

“We’ve looked for a pianist without success,” Dybas said. “So, we decided to try to raise up our own. It will take a little while, but it seemed to be our only option.”

New Hope is far alone among churches in Kentucky’s Appalachian region. In Harlan County’s Upper Cumberland Association of Baptists, Director of Missions Bill Wallace estimates that roughly half the churches have no pianists. The same holds true in the nearby Three Forks Baptist Association that covers Knott, Leslie, Letcher and Perry counties. In the Red River Baptist Association in the Appalachian foothills, less than a third of the churches – five out of 17 – have no musicians.

“When I was growing up, close to half the girls I knew took piano and/or voice lessons, and it was not uncommon for boys to do so,” said Jamie Reynolds, director of missions in the Three Forks area. I know of very few children in our area who are taking piano lessons.”

Kentucky Today surveyed associational leaders across the state, finding that the Appalachian region is hardest hit, though rural farming communities in the west also have been hit. Churches in urban areas, with larger populations to draw from, reported no shortage of musicians or singers.

“Time was when every family had a piano player,” Stewart said. “Parents insisted their children receive music training, but they’re no longer making that a priority, instead investing their time in athletics and other pursuits.”

Bartels said becoming an accomplished musician takes years, so, the shortage isn’t likely to be abated quickly. She said musical soundtracks are the best answer in the short term.

Bartels said she’s hopeful Appalachia will experience the same kind of musical resurgence she experienced as a missionary in the Republic of Benin in West Africa years ago. There, she taught a young man how to play the accordion, and he, in turn, taught others. Within a year, accordion music had spread across Benin.

Bartels is facing a similar challenge in Appalachia, one she relishes.

“I really don’t know why God gave me the privilege to teach music and voice in this little corner of Kentucky, but I am grateful,” she said.

Stewart said Clear Creek should be lauded for its efforts to train musicians and singers. He also encouraged other churches to follow Dybas’ lead in enrolling their youth in private music lessons in their local communities.

“Our public school fine arts programs have taken a beating,” Stewart said. “If the church wants players, then the church needs to groom them.”