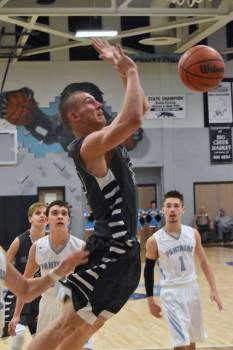 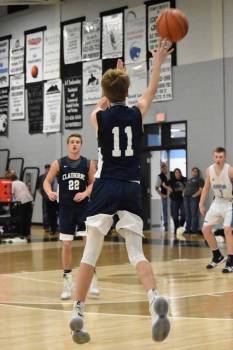 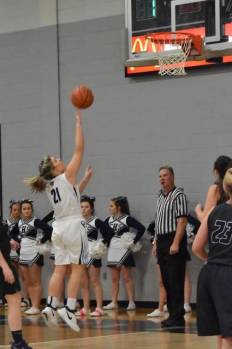 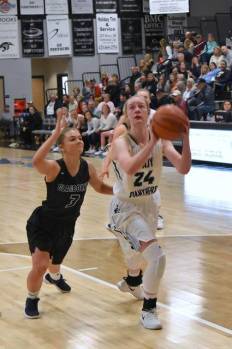 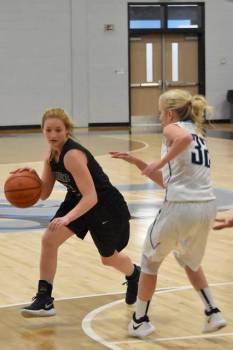 Before the varsity games began, the junior varsity teams took the court. Up first were the girls and they put on a good show during the first half. Three points separated them as the Lady Panthers held a 12-8 advantage. Claiborne grabbed the lead 14-12 coming out of the break. CHS kept the lead throughout the third and went on to win 26-13. Leading the Lady Bulldogs was Kaylee Cox with seven points. Leading the Lady Panthers was Kamorah Rhylick and Emma Brooks both with four points each.

The final JV game was the boy’s contest and the Panthers jumped ahead 10-6 and led by one at the end of the first period. The Panthers kept their lead and held a five point advantage at 18-13. CHS had the score down to one point late in the third period, went up by one and finished the third period down by one, 26-25. Both teams played well down the stretch but it was the Bulldogs stealing the win 37-35 on a buzzer beater by Ethan Poore. Leading the Bulldogs in scoring was Evan Poore. Leading the Panthers was Trey Turner.

Next on the court were the varsity girls. On paper Dennis Cline’s Lady Panthers held the clear edge but in rivalry games fans never know. These two teams played as equals during the first period with the Lady Panthers holding a two point advantage at 10-8. The Lady Panthers made a huge run during the second period as Hayli England was knocking down her shots. Tabitha Roy came off the bench and made an immediate impact by hitting back to back shots. CHS tried to come back and by the end of the opening half was down by five at 19-14.

CHS came out of the break and had the lead down to one point early during the third period but the Lady Panthers had just enough offense to lead after three periods 29-26. With 4:01 remaining in the final period, CHS had the opportunity to go ahead but failed to make the shot. Back-to-back empty possessions by the Lady Bulldogs seemed to seal their fate as the Lady Panthers settled in with a six point lead during the final 1:30. Hannah Heath hit two big free throws with 17.6 seconds left to basically put the game out of reach and the home team won by the final score of 44-39.

The Lady Panthers were led in scoring by Hannah Heath and Hayli England with 12 each. Tabitha Roy had eight, Brook McMichael had four along with Brittney Bean. Hayley Wilson rounded out the scoring with three points. Claiborne was led by Cheyenne Tolliver with 14 and Kaylee Cox with 11 points. Emma Beason had nine, Macie Sumner had three and Sarah Fultz recorded two points.

The final game of the night featured a Panther’s team that was missing three out of five starters plus their head coach. Normally that would give the edge to the other team but the Panthers dropped in the first seven points before CHS answered with a three. Claiborne started getting into foul trouble as they had six with two minutes left in the first period. Houston Hatfield changed the game for the Bulldogs by coming in and making a few baskets but Jayson Upton led the Panthers’ attack and saw his team lead 17-9 after one period of play. Upton helped to keep the scoreboard moving during the second and the Panthers pulled out to a 25-16 lead with 3:40 left in the half. With exactly one minute left in the half CHS had tied the game but the Panthers still led at the half 31-30.

Once again, the Panthers opened the period up with several scores but Claiborne held on and stayed close but fouls were coming into play as the Panthers benefited from the bonus. After three periods, the Gap led 45-35. Every Bulldogs foul during the final period gave the Panthers a one on one at the stripe. Claiborne had one last run left and at 4:20 the Panthers were in the double bonus and leading by six points. After chipping away at the lead, Elijah Beason hit the tying three at the 2:40 mark and got the Claiborne crowd fired up. Hatfield gave the Bulldogs their first lead of the second half and Beeler got fouled on a break away. He hit both shots and gave the Bulldogs a four point lead with 1:29 left. CHS had two empty possessions and allowed the Panthers to narrow the deficit to two points and the home team had the ball with 27.5 seconds left but missed the chance to tie. Hunter Rosenbalm went to the free throw line and cool as ice hit two big shots that sealed the deal and a win for the Bulldogs over the Panthers. The final score was 54-50.

Leading the Bulldogs in scoring was Houston Hatfield with 16. Jacob Williams had seven while Elijah Beason had six. Three Bulldogs finished with five points each, Ty Stone, Lucas Manning and Kade Beeler. Daniel Atkins and Hunter Rosenbalm both finished with three points. Rounding out the total was Evan Ickes along with Christian Whiteaker, both with two points.

Jayson Upton led all scorers and his Panthers with 19. Evan Jackson dropped in eight, Miles Cole had seven. Kaleb Franklin and Jake Templin both finished with six and Brady Pearman completed the total with four points.