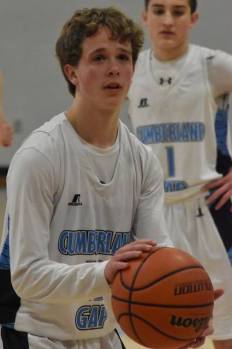 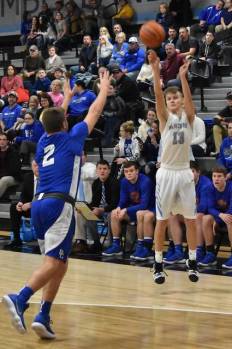 A new year has arrived and the Cumberland Gap High School Panthers began it with a state border war basketball series against the Bell County, Kentucky, Bobcats. It was cold outside but fans knew the action inside the gymnasium would be heated.

There were only two games Jan. 2 and they featured the junior varsity and varsity boys teams. Opening up the action were the JV teams and it looked like the Panthers were going to pull away early during the first two periods but instead the Bobcats came on strong and led at the half 29-26. Dawson Woolum led the Cats on to a 53-48 victory. Leading the Panthers in scoring was Jaden Schertz with 13 and N. Fuson with 12. Also recording points for the Panthers were H. McDaniel, E. Wilson, B. Murphy, J. Templin and K. Bean.

Noticably missing during both games was coach Ernie Clawson who after standing up for his players during a holiday tournament was suspended two games. Filling in as head coach was Kent Hatmaker. The Panthers, behind the hot shooting of Evan Jackson, stayed with the Bobcats during the first period and were down by only one point at 14-13. Cumberland Gap came back during the second period and outscored Bell 10-9 which left the two teams tied at 23 at the half. The fans knew that the Panthers had been playing good basketball as of late and expected them to finish strong.

Unfortunately, the Panthers didn’t knock down their shots during the final two periods and were outscored 12-8 and 12-7 which allowed the Cats to load the bus with a 47-39 victory. Ryan Lambdin led Bell with 16 points. Leading the Panthers was Evan Jackson with 16. Jayson Upton had 12, Jake Templin had four points. Miles Cole finished the game with three points, Kaleb Franklin recorded two points as did Nich Neverstitch. The Panthers had to regroup quickly as the rivalry game against Claiborne was next Jan. 5.