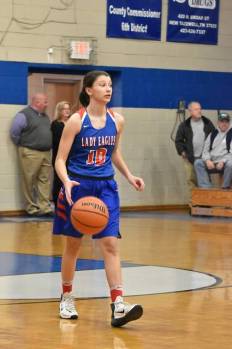 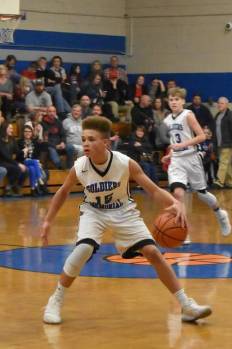 The girl’s teams took the court first and a very good Lady Eagles team had little trouble getting the win. They began early in the first half and placed 25 points on the board while the Lady Blue Devils struggled on the offensive end of the floor, recording only nine points. The second half remained in favor of the visiting Lady Eagles as they scored at a slower rate but outscored SMMS 16-6 and finished the game, 41-15.

There were some interesting things to watch around the boy’s game as the Eagles came in without two players, Elijah Lawson and Trace Provins. Still, the team had to rally and give their best effort as the Blue Devils were a team that could battle the Eagles when they were full strength. Both coaches had their teams ready to play and after one period the score was 8-6 with the home team holding the narrow advantage. SMMS used the second period to roll away slightly and led at the half 24-12.

Livesay improved their scoring during the second half but it wasn’t quite enough to catch the Blue Devils, who finished strong and took the victory by the final score of 51-32. Logan Daniels picked a great time for his season high point total with 20 and Seth Morelock finished with eight points. Landon Wilson and Jason Green finished with six points. Tony Hicks had five and Zack Bailey rounded out the scoring with four points.

Eli Estes stepped up for the Eagles and led with 12 points. Xavier Akers had four along with Aiden Jackson. Braden Ellison, Hyrum Hinckley and Dylan Foster all recorded three points each. Alex Douglas and Iurii Vasilyev rounded out the scoring with a combined total of three points.

There was a four-way tie when the game began and the winner would be seeded no worse than second place. After the game, SMMS found out they had secured the No. 1 seed in the upcoming district tournament.