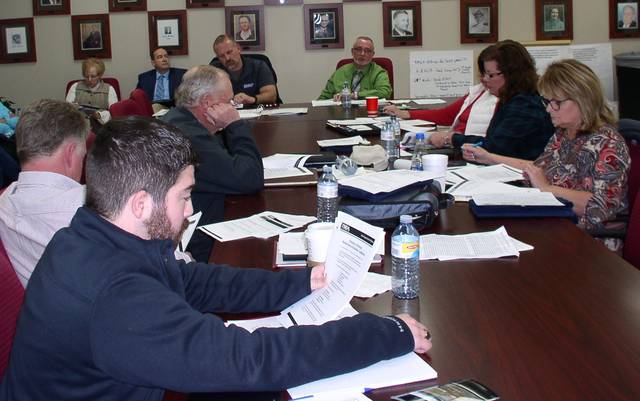 The Claiborne County School Board meets in committee to discuss topics in depth in preparation for the next regular board meeting.

Claiborne High School students who find themselves at-risk of dropping out may just have an alternative program to keep them moving toward graduation.

Early Perkins, with Claiborne Adult Education, presented a proposal last week to the school board during its regularly scheduled committee meeting.

Perkins said he had been in contact with several nearby county school systems concerning a program proven to increase graduation rates.

“We took the positive ideas from each program to assist Claiborne High, who has the largest student population and has the greatest need. We can decrease the dropout rate. We can increase the graduation rate. And by doing this, we can keep the funding coming in. It’s a win-win situation, all the way around,” said Perkins.

As of the holiday break, he said the sophomore class includes 20, 17-year-olds and two 18-year-olds.

Perkins said the program could go a long way toward keeping at-risk students in school and, in the process, helping to enlarge the graduating class of 2020 by as much as 15 percent to 20 percent.

If adopted, the program would provide an alternative way for at-risk students to meet the state minimum of 22 credits to graduate, doing so at their individual ‘pace.’

If all goes as planned, the program could be in full swing by the beginning of the 2018 school year.

In the meantime, Perkins and others are reviewing current data for at-risk seniors at both high schools who could conceivably graduate this May, with the help of the program guidelines.

“What we don’t want to do is allow someone to get out under our watch and be forced to live in poverty-type conditions. Because, as research shows, typically when a person drops out of school, they typically don’t recover from that, financially,” said Miller.

As a former director of the Morgan County school system, Miller said a similar program accounts for about 20 percent — or one-fifth — of the district graduates.

The issue is expected to be discussed further during the regular monthly meeting in February.

In another matter, a concerned parent brought to the committee a request that the board take a closer look at an elective course in women’s studies currently being taught to his daughter, a Claiborne High junior.

The course reportedly teaches ‘feminist’ ideals that include the “understanding of intersectionality, privilege and oppression” of girls and LGBTQ (lesbian, gay, bisexual, transgender and ‘queer’) students.

The parent said he learned about the full impact of the course when his daughter brought a handout home that explains just what would be taught.

According to the parent, “they” are pushing for the class to become a required course of study.

Board member Shane Bunch questioned just how a course of this nature could have been approved by the school system.

“I’d like to know how it got distributed, because I’m appalled at what I’m seeing. It’s certainly the first time I’ve seen it. But, you’d like to think any reasonable, professional teacher, with anything at all in question, would run that by the administration,” said Miller, referring to the verbiage in the handout.

“They need to be teaching something that will bring their scores up. I don’t think this qualifies,” said board member Linda Fultz.

“How can any teacher think this is OK,” said vice-chair Shannon England.

Miller said he would call the teacher as soon as the committee meeting adjourned.

In other action, the board was given a detailed review of the Study Island Program, currently in its second year of use. The three-year program is already seeing remarkable growth in benchmark testing scores, according to math and data coach Becky Pearman.

The board spent a bit of time conducting its required annual director of schools evaluation, even though Miller has been in the position for just six months.