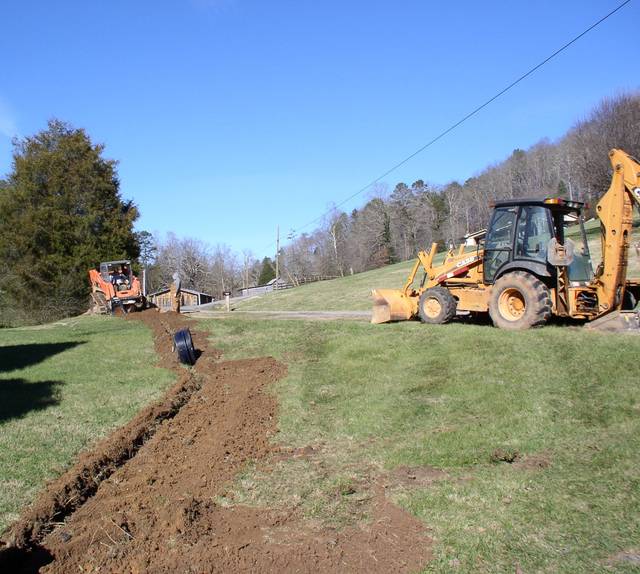 Folks living along a stretch of Fords Chapel Road, inside District 2, receive their ‘city water’ courtesy of a grant that provided the funding for the continuing water line project inside the county. Edwards Grading did the groundwork to connect homes to the continuous flow of ‘good’ water two winters ago.

The county will be using its Three-Star status to make application for a Community Development Block Grant (CDBG) not to exceed $525,000.

Claiborne County has been successful, for the last several years, in using these types of funds to connect homes in the more rural areas to a consistent flow of ‘city’ water. Prior to connection, many residents were ‘making do’ with obsolete springhouses and well water systems.

The county is looking forward to springtime and the influx of boating activities on the waters of Norris Lake. Annual fishing tournaments draw tourists from near and far, bringing with them many dollars to spend inside restaurants, fuel stations, groceries, motels and the like.

Second district commissioner Bill Keck reminded the board of two vital projects inside his district. The parking lot of the public boat launch located near the Union County line, commonly referred to as the Brogan Boat Ramp, is in dire need of blacktop. The project to widen the lot came to a sudden stop, some three years ago, when it became clear that continuing would interfere with a groundhog home.

The county wound up leaving that section alone, creating an ‘island’ in the middle of the lot.

Keck asked that Mayor Jack Daniels contact John Gregory, the TWRA (Tennessee Wildlife Resources Agency) overseer of state boat ramp excavations, to ask when the county might proceed with the widening and blacktopping of the parking area.

The commissioner mentioned possibly teaming up with nearby Union County to get the issue on the state budget.

The second project will involve filling a gully on Leatherwood Hollow Road, which leads to another publicly used boat launch. Apparently, the dirt road experienced a major washout. Keck said he had two farmers willing to use their equipment to fill in the gully.

The county needs an ‘OK’ from TWRA, to do so.

During a telephone interview, Daniels said he was in the process of contacting Gregory.

“When I called him last year, Mr. Gregory said he was overloaded with projects,” said Daniels.

In other action, the Claiborne Regional Planning Commission will now be working with a part-time certified planner from the East Tennessee Development District (ETDD). Dan Hawk, who is also the city planner for New Tazewell and Harrogate, will be assisting the county in its continuing land development projects.

The commission unanimously approved a resolution to contract with ETDD at a cost of $5,614.58.

The resolution calls for the transfer of $1,700 from the debit fund balance to the credit contracted services fund in order to have sufficient dollars to cover the contract.