Pink Out for Black ends on a high note 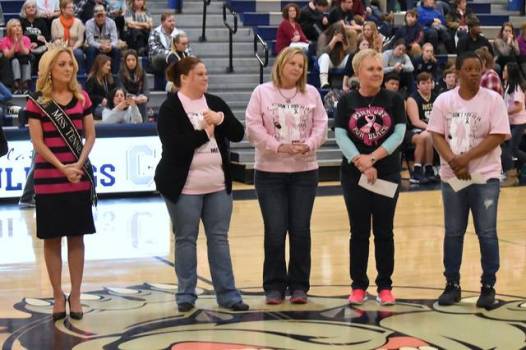 <p>Checks were handed out on behalf of the courageous fighters to be given to cancer treatment centers.</p> 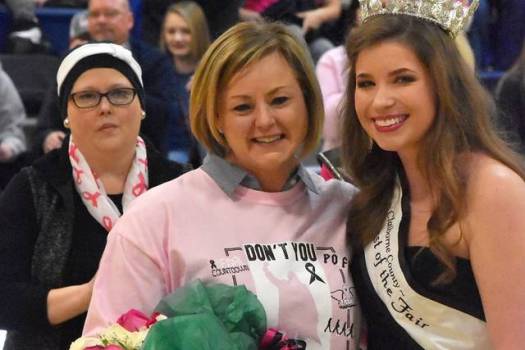 <p>Photos by Allen Earl | Claiborne Progress</p> <p>Claiborne High School teacher and Pink Out For Black organizer Becky Crutchfield was presented a small token of appreciation and was greeted by a huge standing ovation.</p>

The tenth Pink Out for Black event held Jan. 30 concluded a decade of cancer awareness for the community.

Originally intended to raise scholarship funds for the child of one of Claiborne High School’s own, Karen Black, became much more than that. Black, a teacher, fought but sadly lost her battle to the terrible disease and the students, along with one special teacher, Becky Crutchfield, volunteered and began a fight to bring awareness to the cause locally.

It wasn’t long before the initial Pink Out for Black was scheduled and immediately galvanized this small community. Local businesses and volunteers stepped up not only to raise scholarship funds but to help bring the awareness that was much needed. What the event has done successfully is to get people involved from all over the region to help cancer patients with simple funding of trips to even helping with treatments. With the community helping, the event blossomed into one big blessing that continues today in other forms and other organized benefits. When a person is diagnosed with cancer the community now seems to rally around them more than ever and sends help in many ways. It is a testament to the people in the county and in direct relationship with the Pink Out event that started it all.

When asked about the process of preparing these events for over a decade, Crutchfield said, “Over the years the process was always difficult but rewarding.”

She went on to talk about goals for this final event, “Since Karen’s son is now a sophomore in college we thought it would be better to provide more help directly to those fighting the disease including helping with transportation to and even helping fund the actual treatment centers. It’s our hope that we will have enough funds to help out maybe two more years.”

Crutchfield spoke about how the decision to end on this tenth event was made, “The family and I spoke and decided it was time for the program to end. We agreed that there were so many sources for people to get help now besides the Pink Out events and we felt the timing was right. Help is being spread more in the community now and that resulted in less POFB support, but don’t get me wrong — the community still supports us greatly but it feels like it’s time to end.”

Crutchfield hasn’t ruled out a changeover to a different cause and has indicated that the students may help transfer this program into one that addresses another need in the community now, and that need is substance abuse in young people.

There are many people to thank and Crutchfield wanted to give huge credit to Sara Payne. “Sara has been with me from the start and working hard behind the scenes. Other people in the school system have also helped; too many to name but the community is the biggest reason that this became such a success. Without the people of Claiborne County we would not had the opportunity to have made a small difference.”

From scholarships to hair donations, this event fused a community together and showed that a small gesture can become much more.