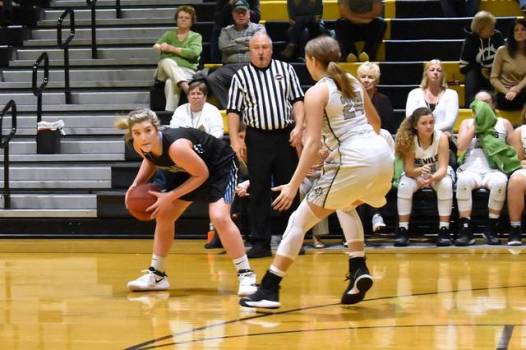 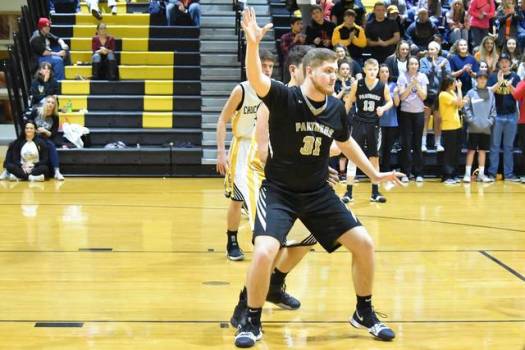 <p>Jake Bullins posts up. He also led his Panthers in scoring.</p>

The Blue Ridge Athletic Conference held its second day of tournament games Feb. 16 and the Cumberland Gap Lady Panthers made their first appearance against the Greenville Lady Green Devils. Hayli England and Tabitha Roy did the bulk of the Lady Panthers scoring during the first period but the Lady Devils led 9-4 after one period of play.

The Lady Panthers’ shots wouldn’t fall to start the second period and the result was a Lady Devil run that pushed the lead out to 30. Roy finally broke the run with a basket down low. Kayli Hinckley hit two from the stripe and that’s all the scoring the Lady Panthers had by the half. Greeneville enjoyed a 36-8 lead going into the third period. Emma Brooks finally got the Lady Panthers on the second half score board around the one minute mark of the third but the Lady Devils still held a 38-point lead.

Going into the final period, Haley Wilson got in the books with a basket and an England three followed. England then got a steal and a basket and proved they were not quitting but in the end it was all Greenville, winning 54-18. Cumberland Gap was led in scoring by England with eight. Sydni Lollar led Green Devils with 24.

The Panthers boys team took the floor against the tournament hosting Chuckey-Doak Black Knights. The Knights opened up the game with back to back three pointers. It was 8-0 before Evan Jackson hit a long three for the Panthers’ first points. Jake Bullins added two in the paint but the Panthers couldn’t stop the Knights. By the end of the first period the Knights led 18-7. The Panthers, with a small run, got the deficit down to nine points at 18-9. With two minutes remaining in the first half the Knights led by 13. Nich Neverstitch added a basket followed by a three from Jayson Upton. At the half, the Knights led 30-20.

Upton hit a three to start the third period and pulled the Panthers to within seven. The Panthers stepped up their defense and had the Knights advantage down to five points but the Panthers allowed the Knights to sneak away in part to an intentional foul / double technical foul on both teams. After several minutes of discussion with the coaches, scoring table and between the men in stripes play continued and by the end of three the home team led 45-30. Kaleb Franklin was undercut and landed on his neck and head at the 7:22 mark and left the game for further evaluation by the athletic training staff. The game had started to get too physical and had the Panther Nation up in the stands yelling their displeasure. With 4:37 left in the game the Knights had a 21-point lead and went on to win 61-39. Leading the Panthers during the loss were senior Jake Bullins with 12 and Evan Jackson with 11. The Knights were led by Devin Jennings with 18.

With the losses, both Cumberland Gap teams were eliminated from the district tournament and ended their seasons.