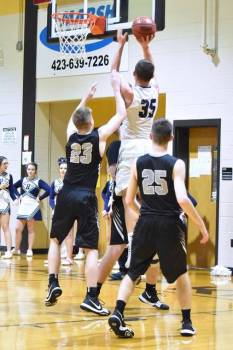 <p>Jake Templin led the Panthers in scoring but here he guards Houston Hatfield.</p> 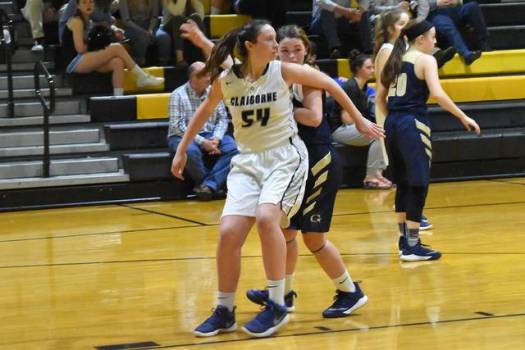 Claiborne opened the game up with Emma Beason, Kaylee Cox and Abigail Ferguson grabbing quick scores. At the 3:24 mark they led 10-2. Sarah Fultz came off the bench and made an impact with a fast break basket. Kelsey Munsey came in strong as well and helped CHS to a 16-9 lead at the end of the first period. West Greene shot the ball better opening the second period and at 5:53 the advantage was still down only seven. Ferguson hit a basket in the paint along with Munsey to keep CHS extending their lead. Claiborne lead by as many as 17 and finished the first half leading 32-15. The scoring came harder for CHS but they found enough down low to stay ahead and lead at the end of three periods 43-27. Claiborne did more work down low during the final period and finished with a 56-41 victory. Leading CHS in scoring was Tolliver with 12. Munsey had 11 and Beason finished with 10.

Next on the floor was the third meeting between two rivals Claiborne and Cumberland Gap on the boys side of the bracket. CHS won the two previous meetings and the Panthers were determined for a different outcome. Claiborne opened up with a traditional three by Houston Hatfield while Jayson Upton got the Panthers on the board. Nich Neverstitch gave the Panthers their first lead at 4-3 with a basket in the paint. The game started looking like the first two meetings as they went back and forth. Jake Templin was doing good things under the hoop and the Panthers moved ahead by five. The Panthers were rebounding the ball well and getting second shots as the score went on out to 10-3. Blaine Caylor broke the Panthers’ run just before the first period ended but his team was still down 12-6. Jacob Williams gave CHS some hope with a three but Evan Jackson countered with a basket. The Bulldogs had the lead down to six with 3:06 to go in the half but were still making too many mistakes. By the halftime break, the Panthers led 20-12.

The Bulldogs looked flat at times during the first half and the Panthers were looking like they wanted it more. Williams opened the half up with a basket and the Panthers countered with Jacob Bullins. The Panthers lead by 10 just under five to go in the third. Empty possessions hurt the Bulldogs as Templin led the Panthers on out to a nine point lead. Lucas Manning hit a big three that helped CHS pull to a 35-27 score by the end of three. Hunter Rosenbalm then hit a basket in the paint to make the deficit six points. Jackson and Upton combined to take the Panthers on out to a nine point game. A Beason three cut the lead to four with 3:09 remaining and Coach Ernie Clawson called a time out to set up a play and Upton was able to cut to the hoop for a basket. With the score now 40-34, Claiborne had to answer but allowed the Panthers to get up another shot that was blocked. Many in the gym thought it was goal tending but there was no call. Rosenbalm hit a three that made it a three point game. Up by three, the Panthers chose to back the ball out and look for an easy lay up that never materialized. They got to the stripe but missed a one-and-one. Claiborne had the chance to tie but missed the three. The Panthers missed the first of another one and one but CHS missed two free throws. The Bulldogs had to foul and the Panthers missed again. Claiborne had one last chance but the Panthers were able to get the win at 40-37. Leading the Panthers in scoring was Templin with 12 points. Claiborne was led by Beason and Rosenbalm with eight points. CGHS moved on to round two action and CHS was eliminated.