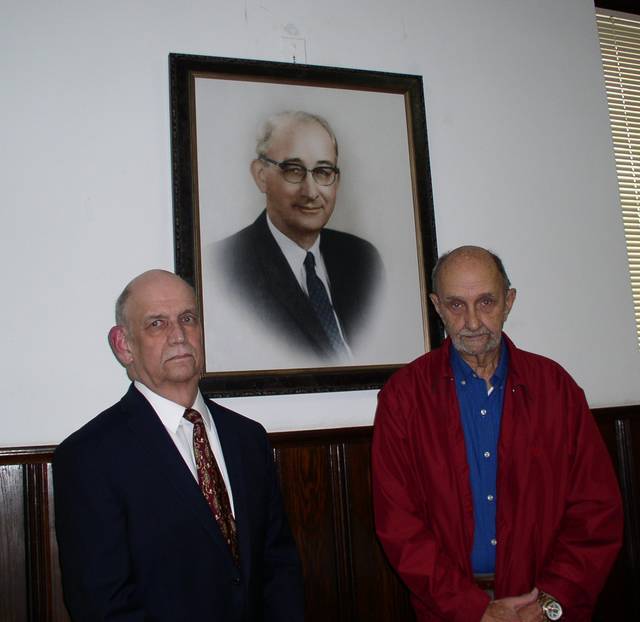 A portrait of the late chancellor Albert G. Shumate now hangs inside the Chancery courtroom of the Claiborne County Courthouse. The courtroom was at capacity on Friday, as well-wishers honored the late chancellor. Shumate’s sons, Tom and Bill, stand before the portrait.

The late Albert G. Shumate was honored late last week by the Claiborne County Bar Association via the official hanging of his portrait inside the Chancery courtroom.

The ceremony was the first of many planned to honor local judges and attorneys of note, according to association president David Stanifer.

“It’s important that we recognize our heritage — that we recognize those among us who have served in the judiciary. Chancellor Shumate lived a full life. His life was a life of service as a teacher, as a legislator, as a county official, as a judge and as a civic leader willing to help the community. He lived a good life,” said McAfee.

Shumate was born in 1899 in the Lone Mountain community of Claiborne County. He was the third of five sons born to Neil and Vallie (Campbell) Shumate.

“Just like most people born in Lone Mountain, they were farmers – hard working people,” said McAfee.

Shumate wanted to be a school teacher. He followed his dream, serving in that capacity for seven years before his appointment as the first principal of the newly built Soldiers Memorial Middle School (SMMS).

“He wanted to go to law school shortly after his tenure as teacher – finishes up his legal studies in 1933 and comes back here, to practice law,” said McAfee.

In just four short years, Shumate was elected to the General Assembly as a member of the House of Representatives.

“About that same time period, there was a vacancy here, in the county judgeship (now known as the office of county mayor). Back then, they actually had some judicial authority. He was appointed and then elected in 1938.

“Now, he was holding both offices. I think most judges would agree, that wouldn’t fly, today. There was a lawsuit brought against him. They were trying to put him out of the general assembly. The argument was, you can’t hold an executive type of position and a position within the legislature,” said McAfee.

The case was sent to the Court of Appeals, where the decision was handed down to uphold the dual roles.

Shumate was instrumental in combating typhoid contamination in the county water supply. The Claiborne Utility District was formed in 1945 to address the crisis, and Shumate was appointed its first president.

He, along with board members Lee Dan Stone Jr. and Mark Lewis worked with the community to bring safe drinking water to the county. The new water plant went online Jan. 1, 1949.

“Whenever there was a problem in Claiborne County, they went to Albert and said, ‘we need help.’ Albert was the kind of guy the community looked to for leadership,” said McAfee.

Shumate became acquainted with then-governor Buford Ellington through legal work he had done for L&N Railroad. In 1959, the governor appointed Shumate to complete the term left vacant, at that time, by the ailing chancellor.

“I’m guessing the governor had a lot of lawyers to choose from, from this nine county district. But, the governor wanted Albert for this position. I’m guessing he was a pretty special person. Someone highly respected and thought a lot of,” said McAfee.

Shumate served 12 years in that capacity, before succumbing on Feb. 1, 1971 to a heart attack while working in his chambers.

His two sons, Tom and Bill Shumate, were present during the ceremony last week. Tom Shumate said he and his brother were honored by the community recognition.

“He spent over half his life working in this building as judge, as an attorney and as county executive. And now, they’re putting him here, permanently,” said Tom Shumate, referring to the portrait now hanging inside the room in which the late chancellor conducted court.