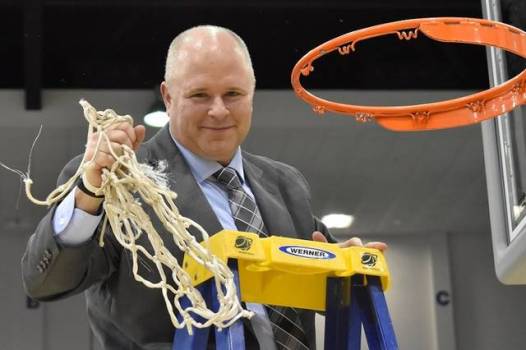 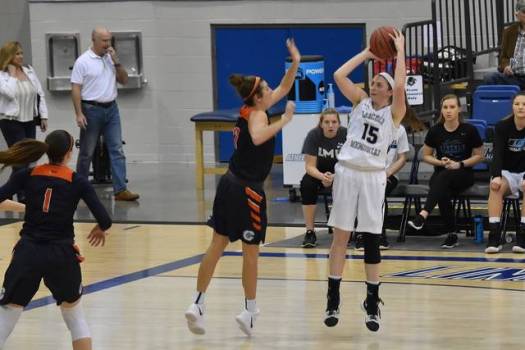 <p>Shea Coker fires up a jumper for the Lady Railsplitters.</p> 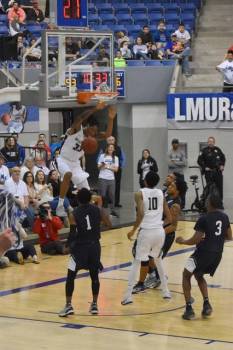 Lincoln Memorial University hosted their rival Carson Newman Feb. 22 at Tex Turner Arena. Along with the joyful sounds from alumni reunions taking place all over the arena were two huge basketball games.

The Lady Railsplitters, under Head Coach Krystal Evans, played hard and basically controlled the pace of the game. Evans did a masterful job with getting rest for her players while keeping the momentum going. At the half, LMU led by five points at 39-34. Qua Hines led the Lady Railsplitters in scoring as she knocked down 20 points en route to the upset win over the Lady Eagles 89-87. It was a great win over Carson Newman in front of 3,170 fans who were very into the game. The team fed off the emotions of the crowd and smothered out a late Lady Eagles run. With the loss, Carson Newman now has two losses against 25 wins. LMU increased their record to 16-10 overall then struggled against Queens but got the win after overtime. The Lady Railsplitters also honored their seniors.

Following the women’s game the 25-1 Railsplitters and 21-5 Eagles tipped off and the Eagles might have been the one team LMU fans were most worried about as the rivalry continues to be fierce. The Railsplitters knew they were in a battle from the opening tip as neither team could gain a huge edge. At the half, the Railsplitters led by one point at 43-42. Deshawn Patterson led the Railsplitters in scoring as he knocked down 19 points and helped his team pull away and defeat their rival by the final score of 89-77 in front of not only a huge Tex Turner crowd but a television audience.

In addition to their 26th win the ‘Splitters kept their 2018 South Atlantic Conference undefeated streak alive plus sealed up the regular season championship. Head Coach Josh Schertz showed great patience with his team when they were behind by nine points and used the bench well. His team also outscored the Eagles in the paint 16-10 and out rebounded them 48-37. By the time this game had concluded the crowd had increased to 4,176 rowdy fans.

The Railsplitters battled the Royals of Queens on the kickoff to Relay For Life, a one versus two battle Feb. 24 with the ‘Splitters winning handily 80-65. After the game the Railsplitters honored their seniors and cut down the nets for being the 2017-18 SAC Champions.