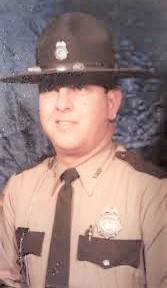 The Claiborne Commission spent a good deal of time mucking through what was characterized by county attorney James Estep III as an “ambiguous” resolution.

The meat of the document was eventually adopted, once an amendment was approved by the commissioners last week, during the regular monthly meeting.

Motorists will see a new memorial plaque attached to the northbound and southbound guardrails leading onto the bridge that goes over the Powell River.

The plaque will memorialize the late Douglas Wayne Tripp, the Tennessee trooper who was murdered in 1991, in the line of duty.

Tazewell resident Wade Woodward addressed the commission prior to the vote. Woodward said he felt the county would be setting a “bad precedent” if the name change went into effect. He likened the change to “rewriting history,” and pointed to the removal of prayer in schools and the tearing down on governmental properties of historical confederate statues and plaques reading ‘In God We Trust.’

Woodward said he did not want to denigrate the memory of the trooper. However, he wanted the bridge name to remain as is, in honor of John Wesley Powell, the soldier, geologist and westward explorer.

“His achievements are worthy of continued recognition,” said Woodward.

After detailing Powell’s life, Woodward asked that the commission, instead, seek out an alternative location to memorialize the late trooper.

“Mr. Tripp is worthy of permanent recognition for losing his life in the service of his fellow man,” said Woodward.

Commissioner William Jessie said there are many places inside the county that carry Powell’s name, including the Powell community, the school and the river.

“That bridge is just a simple short distance that crosses (the river). I do not think that Mr. Powell would object to a bridge being renamed in memory of someone who was shot to death in the line of duty.

“What we’re doing is in no way disrespecting Mr. Powell,” said Jessie.

Commissioner Danny Longworth said, as he understood the resolution, the Powell River Bridge would remain under the same name.

“They’re only asking TDOT (Tennessee Department of Transportation) to add a sign at each end in memory of trooper Tripp. It’s still going to be Powell River Bridge,” said Longworth.

Commissioner Billy Johnson pointed to apparent inconsistencies within the resolution.

“The way I’m reading this resolution — it does say to name the bridge, not to erect a memorial,” said Johnson.

After a bit of discussion, the commissioners came to the conclusion that the bridge that overpasses the Powell River has no official name. Apparently, the green road sign designating ‘Powell River’ is not a bridge name, according to some on the commission.

Estep agreed with the ambiguities of the resolution.

“The first paragraph Mr. Johnson pointed out says ‘name the bridge.’ The second paragraph, it says ‘in memory,’” said Estep.

After more discussion, Estep recommended changing the first paragraph to reflect the intent of the second one.

The commission also changed the header to coincide with the body of the resolution.

By a vote of 16 to three, the amendment was approved. Commissioners Jessie, Zachary Bunch and Shawn Peters were the three no votes.

The amended resolution was unanimously adopted by the commission.

Prior to the final vote, Peters said he thought the task of naming the bridge belonged to the state, not the county. He asked whether the Tennessee legislators have voted on the issue.

It was determined that the matter will be brought to the floor of the state legislature, during its current session.

Jessie asked why Tazewell, rather than Claiborne County, is named in the resolution, since the bridge is located outside the city limits.

Tripp served as a Tazewell police officer prior to becoming a state trooper. Tennessee Senator Frank Nicely contacted city officials to request that the matter be brought to the attention of the county, according to commissioner Whitt Shuford.

As part of the amendment, the commission discussed changing the portion of the resolution from ‘Tazewell’ to ‘Claiborne County.’

In other action, the commission suspended its rules and approved a request made by the current Leadership Claiborne class. The organization asked that the county donate $800 to its project to create a dog park beside the Claiborne Animal Shelter. The funds will help complete the parking lot. The class also asked that the county road department be allowed to haul the gravel to the location.

Jessie passed his vote, during the roll call.

Leadership Claiborne raised some $2,500 toward the project, via fundraisers and private donations.

The dog park, which will be open to the public, will hold its groundbreaking at 1:30 p.m. on March 8. Governor-hopeful Randy Boyd will be in attendance. The public is invited to the event.