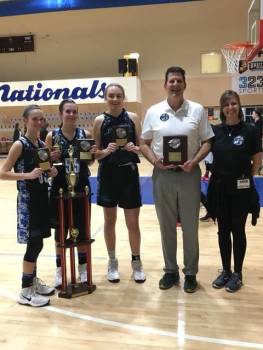 <p>All-tournament selections for the Lady Knights, from left, Presley Cole, Beraya Piercy and Abigail Garner along with coaches Dan and Sandra Piercy.</p> 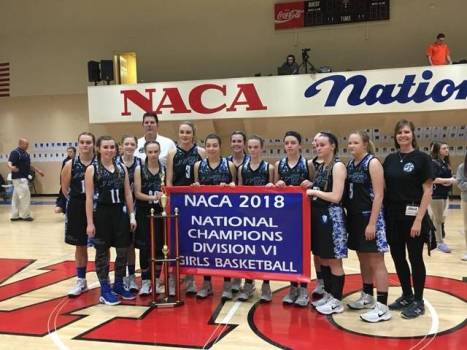 The J. Frank White Academy Lady Knights’ head coach Dan Piercy knew he had a good team earlier during the 2017-18 basketball season but not even he expected to bring home a championship trophy from the National Athletic Christian Association post-season tournament. However, his team got hot at the right time and brought home the hardware.

“The Lady Knights had an amazing week of basketball at the NACA national championships. We beat Carolina Christian from Locust, North Carolina, by a score of 51-21. The second game was against Danville Christian out of Kentucky and we won that game by a score of 41-32. In the championship game against CMA out of Hot Springs, Arkansas, we won by the final score of 44 -26,” he said.

Piercy went on to say, “The Lady Knights had such an amazing season not only breaking last year’s girls record of 16 wins but they broke the all-time wins record of any team (formerly 22 wins) and beat it by one with 23 wins for the season. We were the second youngest team in the tournament starting two sophomores and three freshmen.”

JFWA had three players that received awards for the all-tournament team including Beraya Piercy, Abigail Garner and Presley Cole.

Beraya Piercy was selected as the NACA offensive MVP. She had 48 points in the tournament and also had 32 total rebounds, leading the team in both categories.

“We turned the ball over less than five times a game and we averaged 15 blocked shots per game plus 16 steals per game. The Lady Knights had several looks from college scouts too,” said Piercy.

“Sandra Piercy is my assistant coach; she is our training coach for strength and conditioning and drill work. She has added a lot of things to our program to keep our players healthy and strong and able to play every game. Also, Jamie Posey has filmed a lot of our games this season especially home games,” he added. “Gage Piercy has been filming a lot of our games on the road including the national tournament games. Our principal Mr. Boster hired me four years ago to turn this program around and after four years we’ve broken records every year with the exception of the first one.”

“Our athletic director Cory Cheek has really worked hard to get our student-athletes more opportunities to play on a bigger stage. Our parents have been awesome, fully supporting coach Sandra and myself on everything that we’ve wanted to do with these young ladies. My opinion this is going to be one of the strongest basketball programs for years to come in the Tri-State area.”

Piercy summed up the season, “I’ve just had a wonderful time coaching these young ladies. I’ve been very happy with everything that they’ve accomplished. I knew they were special but had no idea what we would accomplish at the start of the season.”