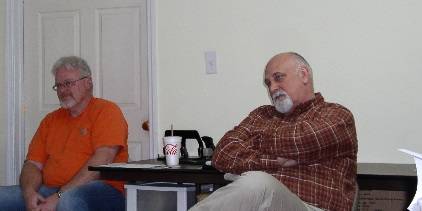 The county recently approved the hiring of a planning consultant to assist the Claiborne County Regional Planning Commission in its widening scope as a review board of potential land development. Dan C. Hawk, right, and Commission chairman Jerry Brooks are shown as the board delves into the particulars of the meeting.

The Claiborne County Regional Planning Commission met in regular session last week — the first since its December meeting. The board spent a bit of time learning more about its new planning consultant, Dan C. Hawk, who is also the city planner for Tazewell and Harrogate.

The commission reviewed a request for a minor subdivision of the Taylor estate, located down Hwy. 63 in the Speedwell community. The estate representative said dividing the property into two lots would allow the owners to sell the one, measuring 1.04 acres, to an interested buyer. That lot includes a residence. Its corresponding septic system does not encroach onto the second lot, the representative said.

The commission approved the minor subdivision of the property, after insuring all required certifications were included on the plat.

This approval seemed to be the catalyst, later in the meeting, for the board to make changes in the way in which it reviews these types of proposals.

Hawk asked whether every subdivision plat proposal, no matter the size, must come before the board for approval.

“Under state law, you have the authority to allow your staffers to review the subdivision plan. It is in complete compliance, in certain situations, to allow your secretary to sign the plat. That prevents people from having to take time out to come here, with what could be a very simple approval,” said Hawk.

Commissioner Gary Estes said he saw the benefit to such a plan.

“My opinion is, they shouldn’t have to come here, or wait. We’re here to serve people and not bog this whole process down. This, here, is a prime example,” said Estes, referring to the Taylor estate subdivision.

Commissioner Whitt Shuford suggested that each member of the board be given an opportunity to learn the outcome of the reviews done by the new consultant.

“If one person says ‘now, let’s wait,’ then they have to come to the meeting. If not — if everybody says ‘alright, go ahead with it,’ then you will sign off on it and it goes into the administrative packet,” said Shuford.

After some minutes of discussion, it was decided that Hawk would email to each commissioner a summary report of every two lot subdivision plat review he personally performs. Commission secretary Roger Poore would then do the official ‘sign off.’ The report would then be included in the official meeting minutes.

The commissioners unanimously approved the motion, with the caveat to add the change to the section in the regulations having to do with minor subdivisions.

The board spent about 30 minutes discussing proposed changes to the subdivision regulations dealing with road construction standards and construction inspection documentation. These draft changes have been an ongoing project, for some time.

The Claiborne Regional Planning Commission normally meets every first Tuesday of the month, at 12:30 p.m., inside the Chamber of Commerce meeting room. The public is encouraged to attend these informative monthly meetings.