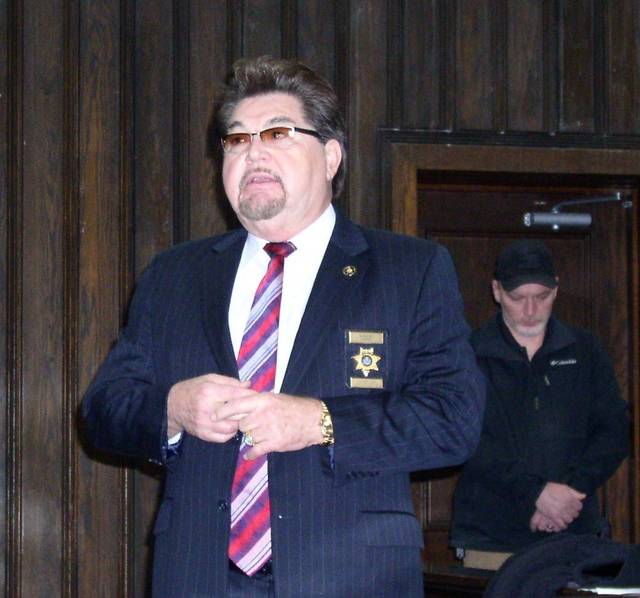 Security was on the minds of many who attended the regular monthly meeting last week of the Claiborne School Board. Sheriff David Ray and Chief Deputy Wayne Lee spoke at length on the subject. The two men fielded questions from concerned parents who say they are uneasy with the current rash of school shootings in other parts of the country, and the threats of gunplay in this and other counties in and around the state.

Ray attempted to put those in attendance at ease without going into detail as to the security protocols currently being used in county schools.

Ray said he could not explain, within a public setting, due to ‘the press.’ He said those who might want to emulate the actions of the shooters must be barred from that knowledge.

He said he would be more than happy to come to the various county schools to discuss safety. His first stop will likely be at the Alternative School.

“I never dreamed that I would see a time that a kid would be afraid to go to school. But, it’s not such a problem that we cannot take care of, in our county. There are things that Tennessee law does not permit for the public to know. But I can tell you, every school has had a plan of action in the event there’s a problem at that school, especially a shooter or where there’s lockdowns,” said Ray.

He said he was impressed with the security measures he found while visiting some of the county school campuses.

Until recently, Ray said his emphasis had been on safety before and after school and during ballgames. Now, his aim is to beef up security 24/7.

“You’ve heard, ‘let’s arm the teachers.’ I’m glad I don’t make that decision, because most people who go to school as long as a teacher does — they came to that school to teach, not to be a law enforcement officer. You’ve got some people who wouldn’t want to carry a gun in school. And, I wouldn’t expect them to,” said Ray.

Those who committed the recent school shootings, he said, had some type of motive, a means and an opportunity to do so.

“I think opportunity is the number one thing that I see in the schools. (For instance), if our schools are not locked in front, we’re negligent,” said Ray.

While speaking on the component of motive, he said school personnel need to develop a relationship with the students to the point where a threat could be recognized before it is too late.

“There has to be a protocol, a procedure, for those who are identified, to deal with that person in school or in the court system,” said Ray.

The thing, he said, that most disturbs him is the children who have been traumatized by divorce or some other separation from their parents.

“There are so many things that would make a third or fourth grader unable to do what’s expected of them in school. They can’t study. They can’t think,” said Ray.

He pointed to the impact social media has on the young.

“They have to be taught early in education that you don’t fool around, making a threat or coming up with some idea that’s going to cause you to stay out of school, for the day. It might not be but one case that’s overlooked, and that would be the case that somebody would be hurt,” said Ray.

Any security measures, he said, need to be simple and created with common sense in mind.

Ray said two major areas for school security are surveillance cameras and a centralized location for communication between school campuses and law enforcement.

“I can tell you, we have that. I’m not telling you it’s top-notch and the best in the country. But, it’s a lot better than it was, four or five years ago, thanks to the school board members and thanks to the county court (Claiborne Commission) for funding these improvements,” said Ray.

He turned to the financial costs of providing better security via the placement of school resource officers (SRO) on every campus.

Lee estimated it would take about $40,000 to install one officer, not counting the cost of a cruiser. The price tag would include training, uniforms, equipment, salary and retirement benefits, he said.

“No matter what we do in the schools, to replacing a door, or adding a camera or adding an SRO, it costs money. The money has got to come from somewhere.

“I know this is an election year, and nobody wants to talk about taxes. But, I don’t know if we can afford to wait longer. The state of Tennessee has come with a program — Gov. Haslam’s School Safety Program. Sen. Lamar Alexander has a program he has initiated in Congress. How long is it going to take those folks to get some money down here that we can use,” said Lee, referring to the programs to beef up counselors and resource officers, and to implement mental health resources in county schools.

Dr. Joseph Miller, director of schools, said he and others are diligently working to raise the ‘comfort levels’ of every person who walks through the doors of every building within the school system.

Miller praised the work done by the CCSO and other local law enforcement during the recent threats.