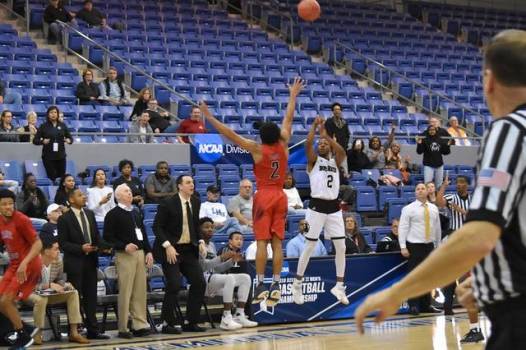 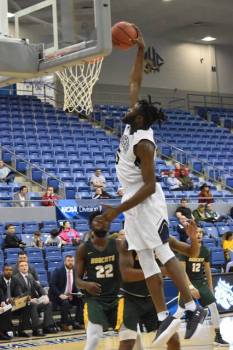 When the fans, players, coaches and officials walked into Tex Turner Arena back in 1991, hosting a NCAA Division II Southeast Regional tournament likely never entered their thoughts. However, March 10 represented the start of the second regional tournament held at the venue. The excellence of the Railsplitters under LMU Head Coach Josh Schertz has allowed the small city of Harrogate a glimpse of national notoriety. The No. 1 ranked LMU men’s basketball team was just one of eight teams vying for the championship.

The first tip-off belonged to UNC Pembroke and Francis Marion. The Braves ran out 5-0 and in the middle of the first half led 23-21 but the Patriots led at the half 40-36. The second half was exciting as the lead changed several times with the Patriots tying it with just seconds left. UNCP in-bounded the ball and David Strother hit his only three of the game as the clock ticked down to zero giving his Braves the win. The buzzer beating win advanced UNCP to Sunday’s semi-final round.

The second game of session one featured the Lees-McRae Bobcats versus the Queens Royals. The Bobcats hit the first three point try of the game to begin the scoring but the Royals then assumed the lead and at the first time out led 15-6. The Royals kept the pressure on and led big at the half, 49-26. The Royals fought off a small run by the Bobcats and extended their advantage to 65-33 and never looked back winning 90-69. Todd Withers led Queens in scoring with 20. The Royals also moved into the semi-final round March 11 facing UNC Pembroke.