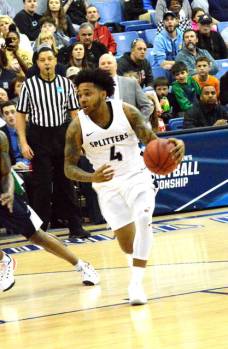 <p>Anthony Cloud | Daily News</p> <p>Deshawn Patterson looks for a driving lane during Tuesday’s game. He finished with four points off the bench.</p> 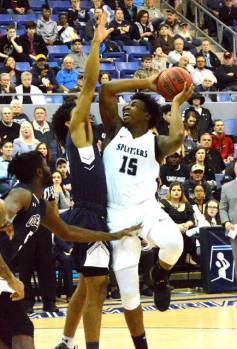 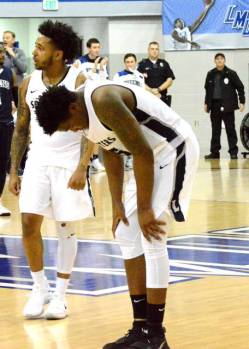 <p>Anthony Cloud | Daily News</p> <p>Dorian Pinson is overcome with emotion after committing his fifth and final foul of the game on Tuesday. The senior forward paced Lincoln Memorial with 16 points as the Railsplitters lost to Queens 69-57.</p> 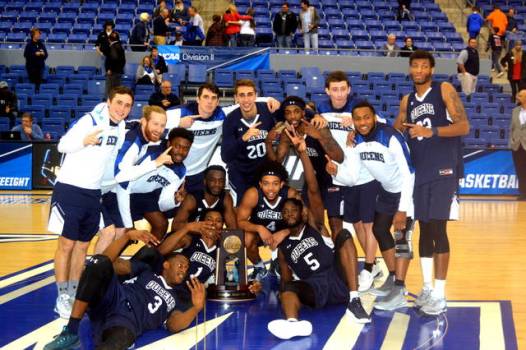 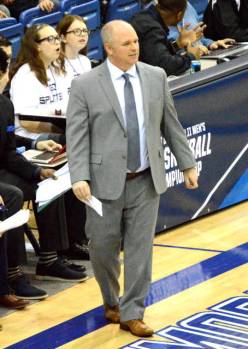 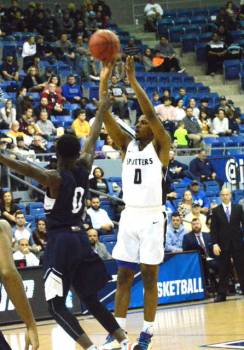 <p>Anthony Cloud | Daily News</p> <p>Cornelius Taylor puts up a 3-pointer against Queens. He ended the night with eight points.</p> 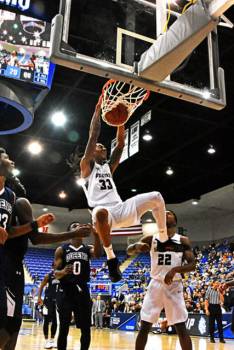 <p>Ray Welch | Daily News</p> <p>Emanuel Terry throws down a thunderous dunk during the first half of Tuesday’s game against Queens. He ended the night with a double-double after tallying 13 points and 14 rebounds.</p>

A four-minute scoring drought down the stretch put the Railsplitters in a hole that they couldn’t dig themselves out of as Queens left Tex Turner Arena on Tuesday with a 69-57 victory and a trip to the Elite Eight in Sioux Falls, South Dakota.

“One game doesn’t define you. We’re crushed that we couldn’t get it done today. We wanted it for those guys. We wanted it for our fans,” said LMU coach Josh Schertz. “We thought we had the best team in the country, but the reality is it’s a one game elimination. Anything can happen, and we weren’t the best team on the floor tonight and that’s all that matters in this tournament.

“That doesn’t detract the fact that these guys were incredible (and) had a remarkable season. It was my honor and privilege to get to come to work with these guys on a day-to-day basis.”

In the fourth meeting between the two teams, LMU had an uncharacteristically bad night shooting the basketball. A team that led the nation in field-goal percentage almost the whole year, the Railsplitters finished the night shooting only 38.6 percent from the field and 20 percent from three-point range.

“Queens did a great job guarding us. They made everything difficult,” said Schertz. “We missed some good looks. We had a stretch where we missed four or five free throws in the second half. It sounds cliche but it’s true — sometimes it’s just a make or miss deal.”

Terry ended the night with a double-double after scoring 13 points to go along with his 14 rebounds. The senior forward also tallied three blocks on the night.

Josh Odem added 11 points to the scoreboard for LMU, while Cornelius Taylor ended the night with eight points. Trevon Shaw — who was the team’s leading scorer heading into the Tuesday’s game — was held to just five points on 22 percent shooting.

On the opposite side of the court, Queens shots 44.2 percent from the field and an impressive 93.8 percent from the charity stripe. The Royals missed only one free throw going 15-for-16 from the line.

Ike Agusi led the team scoring 16 points while going a perfect 6-for-6 from the free-throw line. Jalin Alexander finished the game with 13 points, and Lewis Diankulu finished three rebounds shy of a double-double tallying 12 points and a team-high seven rebounds.

LMU trailed 38-33 heading into halftime. Queens extended their lead to 10 early in the second half before Pinson converted the old-fashion three-point play to narrow the deficit to 43-36.

Later in the half, a 6-0 run cut the lead to one, 50-49, following a 3-pointer from Taylor with 10:39 remaining in regulation. The Railsplitters went cold for about a four-minute stretch while the Royals began creating separation.

During that stint, Queens went on a 12-0 run to increase their lead to 63-51 with less than five minutes to go. Despite a six-point swing with 1:35 to go, LMU couldn’t claw their way back into the game.

Queens was consistent from the charity stripe down the stretch to secure the 12-point victory.