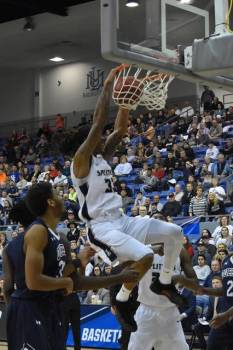 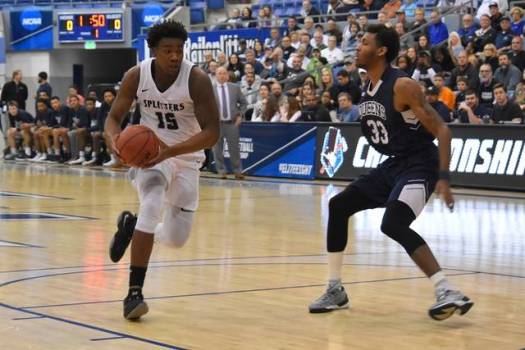 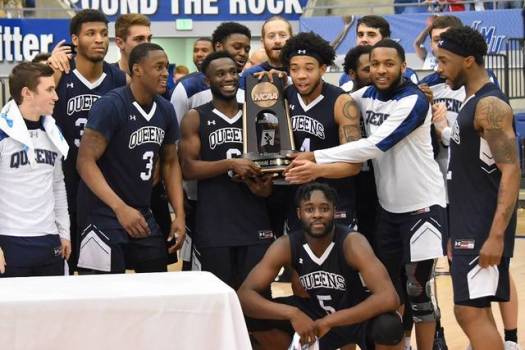 And then there were two. For the second time in two years the Lincoln Memorial University Railsplitters and the Queens College Royals met in the finals of the NCAA D2, Southeast Regional, held March 13. This was also the fourth time the two battled this season alone, with LMU winning the previous games. It was built as a tough match up for the hosting Railsplitters and Coach Josh Schertz knew it would be difficult to defeat this team four times in a row.

“We just have so much respect for those guys. They know what we are going to do and we know them,” said Schertz.

There was a trip to the Elite Eight in South Dakota on the line and the two teams gave their all from the opening tip. LMU got the early momentum but couldn’t get away from Queens. Dorian Pinson and Trevon Shaw was doing the bulk of the work early. Todd Withers was leading the offense for the Royals as they moved out to a 15-13 advantage. Queens kept scoring and ran out to a 20-15 advantage. Minutes later a two-handed monster slam by Emanuel Terry pulled LMU to within one point but a three by Jalin Alexander pushed the score out to 26-19. Queens was quicker off the first step during the first half and with five minutes remaining Alexander helped lead them out to a 10 point advantage. The momentum was all in favor of Queens as LMU was in the rare position of mounting a comeback. Josh Odem pulled them to within four. Spurred on by great team defense, LMU pulled to within two but a big shot by Queens quieted the raucous crowd down. The half ended with Queens leading 38-33.

Queens stayed on the boards to start the second period and stayed hot offensively to stay ahead 43-36. Another LMU put-back slam by Terry changed the momentum but Queens still stayed out front. Odem hit a basket that pulled LMU to within five points but Shaun Willett knocked down anther three. At the 10:50 mark Cornelius Taylor hit LMU’S second three and pulled them to within two, then LMU got a steal and drew a foul. With the chance to tie, LMU hit only one free throw. The LMU defense woke up in full force but offensively the ‘Splitters made mistakes and missed needed shots. Deshawn Patterson’s basket pulled LMU to within two points. Mike Davis once again helped Queens stop every LMU run. Davis did that throughout the tournament as well. The lack of an outside shot began to loom huge as LMU was trying to come back from another Queens run inspired by Ike Agusi. Odem helped LMU by making a layup and a foul shot that had LMU down by only six. A call by the referees on Terry that ‘Splitter Nation did not see the same way changed the game and allowed the Royals the opportunity to make free throws and win the regional championship by the final score of 69-57.

Agusi led the Royals with 16 points, Alexander had 13, Lewis Diankulu had 12 and Davis finished with 10 points. Queens out rebounded LMU 36-32. The Railsplitters were led by Dorian Pinson with 16 points and eight rebounds while Terry had 13 points and 14 boards. Odem also recorded double figures with 11 points.

After the game LMU Head Coach Josh Schertz said, “Sometimes it just comes down to making or missing shots. We didn’t make enough tonight and they did.” He went on to speak to the fans, “The fans were so great tonight. At times, you couldn’t hear anything at all. If we would have played as good as the fans cheered, we would have won the game.”

Schertz also wanted to speak about his senior group, “This group is special, they have accomplished so very much. On top of the many championships and awards they are 126-14 over the last four years and I don’t know if any division two or division one team has a better record over that span.”