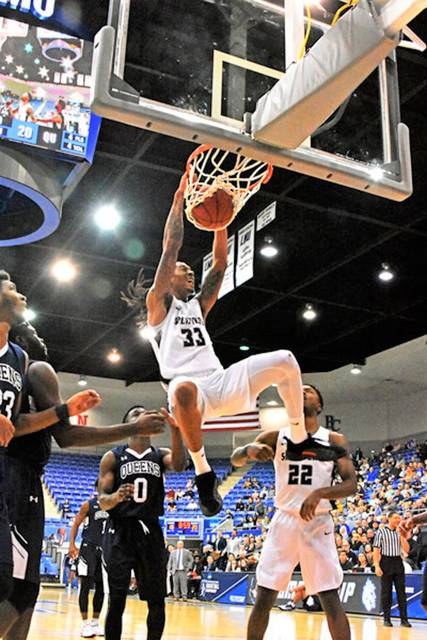 Emanuel Terry throws down a thunderous dunk during the first half of LMU’s last game against Queens.

Lincoln Memorial University senior forward Emanuel Terry has been named to two different All-American teams as the Enterprise, Alabama, native was selected as a second team All-American by the Basketball Times while also earning a spot on the NABC Division II All-America team, it was announced on Monday.

Due in large part to Terry’s remarkable individual season, the Railsplitters went 32-2 to record their fourth consecutive 30-win season, captured their sixth straight SAC regular-season title and fourth SAC tournament title while running the table in conference play, finished the year ranked No. 1 nationally for the third time in four years and made their eighth consecutive trip to the NCAA Tournament. Lincoln Memorial hosted the Southeast Regional for the third time in four seasons and made its third straight trip to the regional championship game.

In his final season in the Blue and Gray, Terry racked up 16.9 points, 10.3 rebounds and 2.2 blocks per game while shooting 71.1 percent from the field. He led the conference and ranked second in the nation in field-goal percentage while compiling 16 double-doubles, which were the most in the SAC and the 14th-most in the nation. He also finished 19th in the country in rebounds per game and 14th in total blocks. His 209 total field goals led the SAC and ranked 43rd nationally.

Terry had a number of impressive performances, including a career-high 31 points on 11-for-13 shooting with 14 rebounds in a win over Newberry on February 3. He produced a pair of 27-point double-doubles against Coker and Carson-Newman in early January, and opened the season with a 22-point, 21-rebound outing against Lees-McRae, which qualified for the NCAA tournament. He had eight other games with at least 20 points on top of all that.

The senior was named to both the SAC Championship and NCAA Division II Southeast Regional All-Tournament teams.