Hanging up the apron, spatula 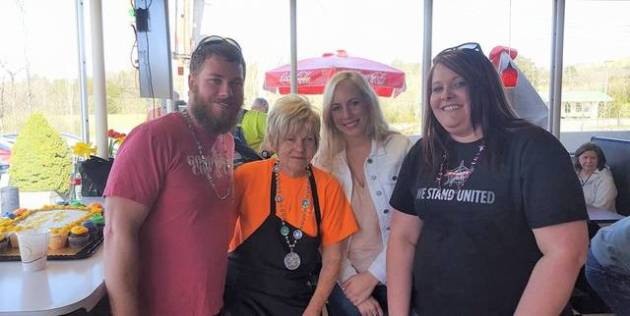 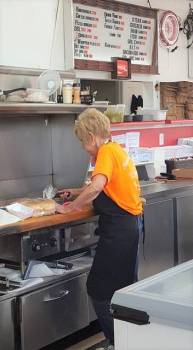 <p>Courtesy of Scarlet Wolfenbarger</p> <p>This familiar sight, visible through the windows of the Frostee Freeze, will be a memory. Edith “Toot” Wolfenbarger retired this weekend after 52 years.</p>

After 52 years at the grill, Edith “Toot” Wolfenbarger hung her apron and spatula up for the last time at the Frostee Freeze in Tazewell.

Her official retirement party was Saturday, and the popular restaurant was packed with people wanting to say goodbye. Once word got out she was retiring, patrons stopped in when they could to wish her well.

“She knows it’s the right time,” said her daughter, Scarlet Wolfenbarger. “It will be an adjustment, but she needs to slow down.”

The Frostee Freeze has been Scarlet’s second family as well. Toot began work there in February 52 years ago and had Scarlet two months later.

“She said that she won’t be cooking anymore now,” Scarlet said with a laugh. “She’s told people she’s going to let me do all the cooking. She needs to just enjoy life now.”

In all her years at the Frostee Freeze, Toot was never late, Scarlet added. If she was scheduled to begin work at 4 p.m. she wanted to be there at 3 p.m. or a little after, and wouldn’t clock in until her scheduled time.

“It’s just the way she is, and she’s always done that,” Scarlet said.

Toot has been a valuable employee to the Frostee Freeze in many ways.

“Toot is going to be missed,” said co-owner Beth Selvey. “She knows everyone’s grandparents, parents and kids. To my generation, and a couple before, she has been the only one people have known to cook the Frostee burgers. We definitely have big shoes to fill.”

Among the people who were on hand to say ‘happy retirement’ to Toot was Mike Williams, who has represented Claiborne County as both a state representative and state senator and is now Union County mayor.

“Toot put her heart and soul into this place for so long. That’s what makes it so special and so much like family. We don’t have enough of that in this world anymore.”