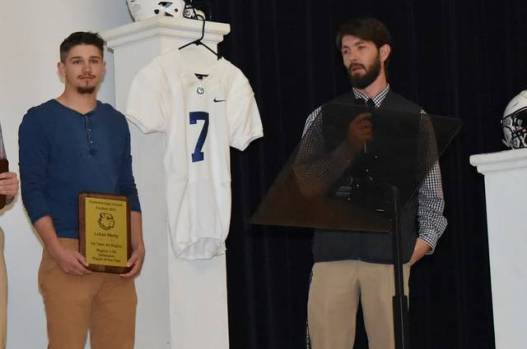 <p>Coach Nathan Medlin hands Lukas Neely, left, a plaque that confirms him as the most decorated Bulldog ever.</p> 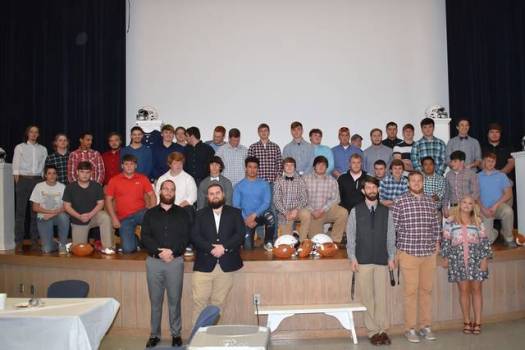 <p>Photos by Allen Earl | Claiborne Progress</p> <p>The 2017 team was brought up on stage and received a huge applause during the football banquet.</p>

Claiborne High School celebrated its 2017 football players and playoff season with a banquet April 8 in the multi-purpose room. The event began with catering from Haymaker Farms after the blessing was given by Bulldogs’ senior Ty Stone.

After the meal, Dr. Joe Miller was the guest speaker and spoke of being in the first year as director of schools. He also spoke of how to properly handle adversity.

“I was cut from my basketball team but I went and practiced hard and made the team next season and ended up playing basketball at the collegiate level,” said Miller. He went on to give advice to the coaches and really impressed upon them the idea that they are role models to the players.

Miller added, “You are always going to be a teammate to someone in life no matter what you do. The players will always take a part of you, coaches, everywhere they go.”

There were many awards given out on both sides of the football. Coach Nathan Medlin spoke to the team and then addressed the seniors. He gave each a DVD of season highlights plus gave the captains the patches from their jerseys.

After the announcement of all the awards, Paul Fugate addressed the parents to come out and help the booster club, “We need weekly volunteers as much as we need money, so please come out.” He also addressed graduating players to come back and participate.

Jeff Stephenson completed the program by saying, “Over the last seven years every sport is going in the right direction. Baseball is a good example. Softball is on the map now. Football has turned the corner and had the first playoff game since I arrived as athletic director. Coach Medlin has done a great job and he has assembled a great staff.”

He went on to say, “The players are being better on and off the field and I’d like to also thank the players and parents. This is a good time for Claiborne football.”