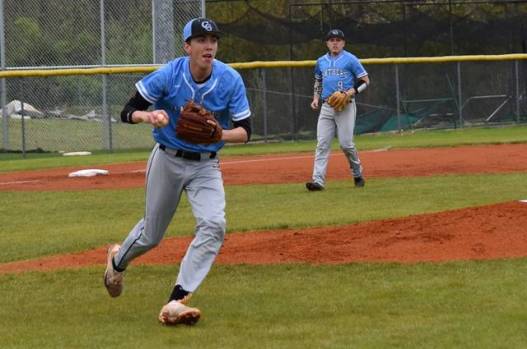 <p>Panther Brennan Murphy is pitching lights out this season but here he helps his cause by cleanly fielding his position.</p> 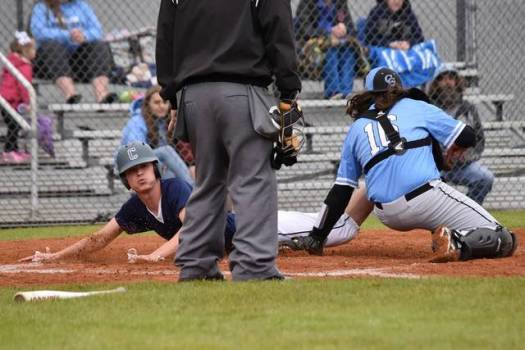 <p>Photos by Allen Earl | Claiborne Progress</p> <p>Bulldog Hadyn Hollin looks at the umpire during his slide and waits for his call.</p>

Two rival high schools, Claiborne and Cumberland Gap, battled on the baseball diamond April 25. The games had already been rescheduled due to inclement weather and both coaches knew time was running out as the district tournament is fast approaching. Game one of a double header began in spotty rain showers and turned into a baseball marathon.

Both Bulldog Cedric Brown and Panther Brennan Murphy were lights out on the mound. Brown succeeded by throwing 13 strikeouts and Murphy by getting ground balls and great defense. The Bulldogs got the offense going first as Hadyn Hollin doubled followed by a Jake Wilson double. Hollin was involved in a bang-bang play at home on a head first slide. He was called out but Brown was able to push Wilson home on a fielder’s choice. Wilson also had a close play at home but his head first slide was successful.

Micah Cannon singled and manufactured the Panthers’ first run with the help of Darrin Robertson. The Bulldogs made a pitching change in the top of the sixth going with Elijah Beason with two outs and one on base. Beason got a fly to the outfield for a clutch third out.

It was a defensive struggled for both teams as they bent but did not break. Both teams were leaving men on base but for the most part Claiborne was hitting the ball right to the Panthers defense. It changed in the top of the tenth inning for CHS as Jon Werner singled. Beason hit the ball hard to first and reached on an error. Werner scored the go ahead run. Ty Stone, Gage Callebs and Hollin combined for four more runs pushing the score out to 6-1 but they had to get three more out to secure the win.

Cannon was able to single in Holdin McDaniel but that was all the Panthers were able to do before the third out was recorded. Originally scheduled for seven innings this one had turned into a 10-inning marathon and one that both fan bases were fortunate enough to witness. The stage was set for game two of the double header.