‘The grave that they dug him had flowers’ 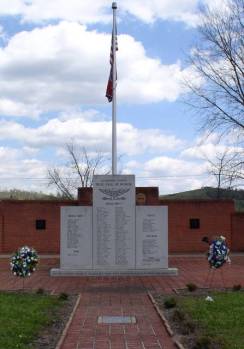 <p>Jan Runions|Claiborne Progress</p> <p>The Roll Call of Honor stands in testament to all Claiborne County residents who died while serving their country. The Memorial was erected several years ago as a reminder of the price paid for freedom. It stands as the centerpiece inside the Rome Cardwell Park, on Main Street in Tazewell.</p> 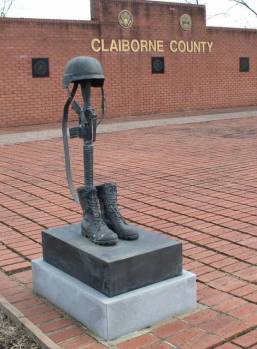 <p>Jan Runions|Claiborne Progress</p> <p>This metal statue stands inside the Rome Cardwell Park, serving as yet another reminder of those who paid the ultimate price for America to remain free. The statue symbolizes what was in many cases done to mark the site of fallen soldiers – the placement of the helmet, rifle and boots. This soldier will never again use the helmet for protection, his rifle for war or his boots to run into battle.</p>

Decoration Day, as it was first called, came about as a way to honor those who died during the Civil War. The day was officially proclaimed in 1868 by General John Logan, national commander of the Grand Army of the Republic.

In his proclamation, he designated May 30 to commemorate those who died in the service of their country by the “strewing of flowers upon the graves.”

The first Decoration Day was observed with a speech given by General James Garfield at Arlington National Cemetery. The 5,000 attendees ‘strew flowers’ upon the graves of some 20,000 Union and Confederate soldiers buried there.

New York state was the first to recognize the holiday in 1873. By 1890, all the northern states had followed suit.

Those living in the southern part of the country refused, however, to acknowledge the date, and chose to honor their dead on different days.

The south finally came on board after World War I, when the sentiment changed from honoring just Civil War dead to those who died in any war.

Memorial Day, as it is now called, became a uniform holiday in 1971 with the passage of the National Holiday Act. Nearly every state observes this holiday on the last Monday in May.

The wearing of red poppies on Memorial Day came into fashion via Moina Michael, who in 1915 penned a poem after being inspired by “In Flanders Fields.”

She sold the colorful flowers and donated the money to help servicemen in need.

The idea quickly spread, and funds from the sale of red poppies helped many orphaned children of the military, particularly in France and Belgium.

In 1922, the Veterans of Foreign Wars (VFW) picked up the tradition, and within a couple years, the ‘Buddy’ Poppy Program was selling artificial poppies created by disabled veterans.

In 2000, the ‘National Moment of Remembrance’ was enacted, prompting a voluntary mass observance across the country at 3 p.m. local time.

The Roll Call of Honor Memorial, located inside the Rome Cardwell Park in Tazewell, lists the names of every Claiborne county resident who died in service to country. The roll call begins with World War I and ends with the Sinai Peacekeeping. There are a total 133 names etched into the marker. During World War II alone, 88 county natives gave their lives for freedom.

Twenty-two names upon the marker signify county residents who died during World War I. Eleven servicemen gave the ultimate during the Vietnam War and ten during the Korean conflict.

One brave serviceman died in Iraq and another during the Sinai Peacekeeping.

Clearly, Claiborne County has been well-represented during every war waged. The county has lost many good and brave members of the armed forces.

Every year, we gather in the park to honor those who gave the ultimate during wartime. This year, the Memorial Day service will occur at 11 a.m. on May 26.

And, we as a county will faithfully observe the traditions associated with the day. We will remember in word and song, in the salute to the flag, to the playing of Taps, to the firing of rifles and, later, the ‘strewing of flowers’ upon the graves that we dug them.