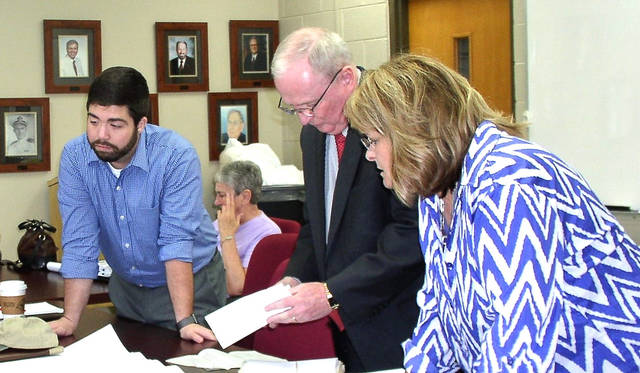 Monthly Leader Recognition Day was handily ‘kicked to the curb’ last week by the Claiborne School Board, who voted five to one in favor of killing the idea.

What had become quite the struggle to establish a day to honor the late evangelist Billy Graham turned into months of debate over the amendment to create, instead, a famous leaders’ day.

The issue was debated first by county attorney James Estep III, who warned the board that its establishment could very well land the county in litigation. The result could be the payout of hundreds of thousands of dollars, due to a previous lawsuit that in essence banned the county from sponsoring any religiously-based programs in the public school system.

Board member Justin Cosby, who drafted the original resolution, amended the document to encompass leaders from all aspects of life and history. The amendment seemed to fare no better, especially with the majority of teachers who spoke out against the issue via Louisa Beeler, president of the Claiborne County Education Association.

Many of the teachers’ complaints had to do with time taken away from regular instruction to accommodate the curriculum and resources needed to teach about a specific leader each month.

“Who are the teachers that would be specifically responsible for doing this? How can you justify picking out the teachers to cover it, even if it’s for 10 minutes?

“We feel like it would be punishing certain teachers,” said Beeler, during the school board committee meeting held in May.

Cosby was the lone ‘no’ vote in rescinding the amended resolution.

In other action, the board revisited the proposal to contract with PESG (Professional Educational Services Group) for substitute teachers.

Kim Woodson, regional director of sales and service, addressed what would occur immediately following the signing of a contract. She said an ‘A to Z’ meeting would be called to outline every aspect of the program and extensive training would be planned and executed.

Included in the contract costs is the automated calling system.

“It’s valuable for reporting, to know exactly how many subs you used this year, how much did it really cost you. (It’s valuable for) professional development for teachers – how to track that,” said Woodson.

PESG would hit the floor running with reporting, recruiting, off-boarding and training, she said.

Board member Shane Bunch said that, while he appreciated the program, he could not in good conscience approve the spending of extra funds to perform the same tasks that are currently being done.

“My understanding is that it’s going to cost us somewhere between $30,000 and $40,000 to initiate this program – and that’s each year. I would love to see it, but when we’re right now looking at losing one teacher per school, not tenured and we’re looking at losing somewhere close to $1 million in shortfall – I know $30,000 to $40,000 doesn’t sound like a lot.

“I just can’t see telling a teacher we’re not bringing him back because we’re spending (the funds) on a program that we already do. It may not be as nice or efficient, but we’re getting the job done,” said Bunch.

Woodson said her company would be willing to offer a one-year contract so that the school district could ‘try it out.’

“The services that we’re going to offer are going to be more (than what is currently being done). Ongoing professional development won’t cost the school anything. We work to make sure that the people who walk into the classroom can have management skills and help those students,” said Woodson.

Dr. Joseph Miller, director of schools, said he had been assured just that week that the costs of contracting with PESG would be ‘budget neutral.’

Bunch said he just couldn’t see how hiring someone could cost the same as what is already being accomplished without the service.

Board chair Micheal Jo Gray said he had yet to have one teacher come to him with complaints about the current way in which substitutes are enlisted.

“Since then, I’ve yet to have one come to me and say ‘I really like this PESG.’ That, to me, is who it’s going to affect. And, that’s who I represent on this board,” said Gray.

Since the topic was for discussion purposes only, the board moved on with another item.

The last attendance record for the school year, set by Springdale Elementary, came in at 96 percent.

The next committee meeting will begin at 6 p.m. on June 21, inside the BOE Central Office conference room. The next regular monthly meeting of the school board will occur on July 12, at 6 p.m., inside the large courtroom of the Claiborne County Courthouse.