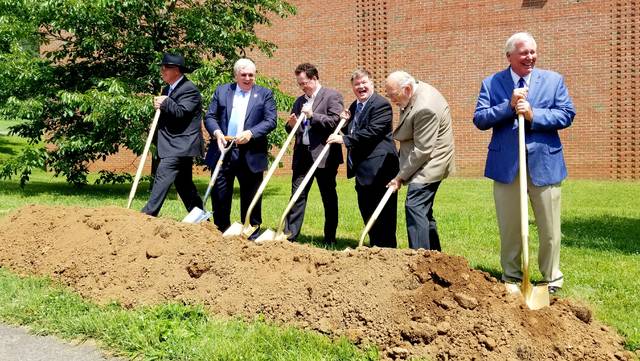 The LMU Board of Trustees break ground outside of the Lincoln Library and Museum on Tuesday.

The LMU Board of Trustees, university president Dr. Clayton Hess, and many others gathered in the auditorium of the museum for the presentation of the Matching Challenge. The challenge is to raise $1 million that would go to the expansion of the library and museum.

With that expansion, the museum would also undergo various changes to better represent their goals and honor Lincoln’s legacy.

Dorothy M. Kincaid’s husband, Hansel Oliver Kincaid, served as president of LMU from 1947 — 1958, and the Kincaid’s have been some of the universities most long standing financial supporters.

The ceremony began with an invocation by National Honorary Campaign Co-Chair, Dr. B. James Dawson. Then a welcoming message was presented by Hess who then handed the floor to the Chairman of Board, Dr. Autry O.V. “Pete” DeBusk — who outlined the vision and construction of the expansion.

The museum director, Michael Lynch, took the stage to further expound upon the vision of the museum moving forward.

Lynch stated the first major change to the museum would be an overhaul of the first gallery, which would be dedicated to the chronicling the first part of Lincoln’s story.

The exhibits will seek to provide further context to Lincoln’s presidency, his assassination and funeral, and the Civil War in general. It will be a brand new exhibit on “ordinary Americans”, as Lynch put it. The museum has in its possession journals and items from soldiers, nurses and others from the war that will be used to humanize the war for all who visit the museum.

After the presentation was wrapped up, a symbolic groundbreaking was held outside where the Board of Trustees turned soil with shovels to commence the next phase of the museum and the university.

DeBusk also announced that J. Frank White Academy will expand with a kindergarten through fourth-grade branch that will go in the campus’s Kresge Hall building. This is set to be completed by fall 2019.

The university will also introduce more parking spaces to accommodate traffic and prevent potential issues. A Chick-Fil-A will soon be built on campus as well.