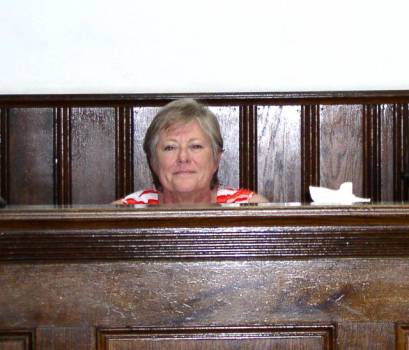 <p>Jan Runions|Claiborne Progress</p> <p> Frances Cardwell sits in the Chancery courtroom box where she has conducted many of her ‘in session’ duties.</p> 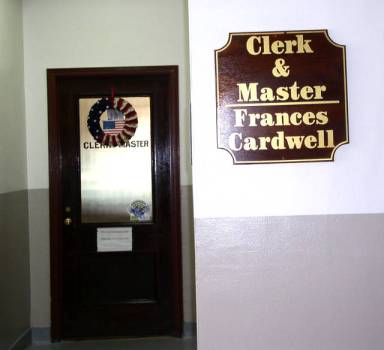 <p>Jan Runions|Claiborne Progress</p> <p> The door through which Frances Cardwell, clerk & master, has walked since 1978. Cardwell has spent many a long evening inside the office placing the finishing touches to a document or attending to some other piece of court business before calling it a night. She will walk through the door, for the last time, upon her retirement next month.</p>

For nearly half a century, Frances Cardwell has conducted all manner of court-related duties under the leadership of a total five chancellors.

“I was a senior in 1969 at Claiborne High School. Our typing teacher, Annabelle Fugate, asked who with typing and shorthand and bookkeeping wanted jobs right out of school. Myself and two or three other girls put our hands up.

“Mr. White (the late chancellor Billy Joe White), who was a practicing attorney, and Bill Harrell were partners – they broke up their partnership and Mr. White was going on his own. He asked me if I’d like to work for him,” said Cardwell.

She began her part-time job with White working on Saturdays.

“I graduated on a Saturday and started work (full-time) the next Monday morning,” said Cardwell.

She remained with White through his years as an attorney. When he became chancellor in November 1977, White brought his trusted secretary to his new office.

Cardwell was appointed the new clerk & master in 2005, upon the retirement of Tom Shumate, who had held the position for 28 years.

Her 43 years association with White created as close a bond as any brother or sister, she said.

Just a portion of Cardwell’s workday involves the keeping and executing of dockets. She serves as the legal custodian of court records. Part of her job includes the filing and entering of documents, pleadings, papers and exhibits. Cardwell also attends court, administers oaths, issues summons, writs, executions and subpoenas.

Another part of her duties involves the general handling of all estate matters including guardian ad litem and conservatorships.

Although significant estate decisions made by the clerk & master require the chancellor to sign off on them, Cardwell is responsible for quite a bit more than simply administering and managing the paperwork related to a government office.

Chancery court is, in essence, the equity court patterned after old English law. Most of the cases involve domestic matters like divorces and custody, probate, guardianships, boundary lines disputes and other real estate issues, she said.

A significant chunk of her day, she says, involves assisting the attorneys and the public.

“We now have several young attorneys that we try to guide through the process. Most of them will tell you that law school prepares them by teaching them the law, but it doesn’t teach them how to ‘practice’ it – how to file their pleadings and how to prepare for court,” said Cardwell.

She says life as a judge is ‘different.’

“A judge and his staff are encouraged to be very low-key. Judges are not to take an active part in anything that might come into their court. If we attend public functions, we should not sit at head tables. We’re introduced as a private individual and not as representing the jobs we hold.

She says a significant portion of the job is striving to help as many people as possible.

“If you can’t feel empathy for people, you need to go do something else,” said Cardwell.

During his tenure, she said the late chancellor White would routinely go home and worry whether he had made the right decision on court cases that day.

“He understood he had the futures of the elderly, children, everyone in his hands. Those are the cases that concerned him and all the chancellors we’ve had. They take it very seriously and our job is to support them – to make it easier for them to concentrate on what they need to do,” said Cardwell.

She was asked why she decided to retire with 49 years in office – just one year shy of a full 50 years.

She says leaving will be tough.

“I have been so very fortunate. I’ve had the opportunity to meet people who, if I’d chosen another profession, I wouldn’t have ever met. It’s interesting work. It can get a little crazy at times. Some of it is just ordinary and day-to-day things you have to do. But then, there are moments.

“Just as soon as you think you’ve heard ‘the story,’ something’s going to happen,” said Cardwell.

She was asked how she would like to be remembered.

“I just hope that, every once in a while, if someone thinks of me, they have a kind thought,” said Cardwell.

She and her husband, Doug, will have been married for 49 years in September. The couple has two sons, Allen and Chris, and three grandchildren, Lucas, Bryson and Adyson.

Cardwell says she stays in shape attending to her 65-acre farm, complete with cattle.

Rita Jones, who has worked for the last 35 years in the clerk & master’s office, will be taking over for Cardwell upon her retirement.

The Office of Clerk & Master will be holding a retirement party for Cardwell, beginning at 3 p.m. on July 11. The public is invited to drop by the event.