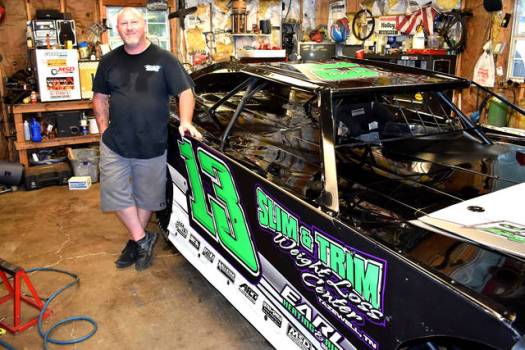 <p>Allen Earl | Claiborne Progress</p> <p>David Clark stands next to his Incredible Hulk No. 13 Super Stock car that he races at 411, Volunteer and other area tracks.</p> 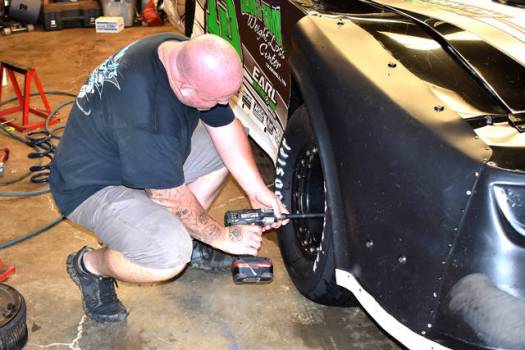 David Clark, former ATV, Sportsman and Modified Street driver is currently a Super Stock driver from New Tazewell, and he has been involved in racing since his teenage years. He was very interested in the mechanical side of things, and his love of racing links directly to the friendships made around the local dirt tracks.

Clark is the son of Ed and Rose Ann Clark of Tazewell, and he has two kids — Michael and Katelyn. Clark cherishes the time spent working on his car with his crew chief Katelyn.

“She is my crew. She loves helping me on the car and knows lots about how the car works. She is trustworthy in getting it ready to race,” said Clark. “She asked me if she could put the engine back together after having it freshened up, and she jumped right in and did it. She did it all but torque the head bolts. She just wasn’t strong enough to do it. I’m really proud of her.”

Clark got into racing the same way as he started — by helping others. He has learned the sport by assisting Prentice Harvey, Wayne Overholt and more. When he helped these racers, they won races giving David some irreplaceable knowledge about set ups and the general internal workings of a fast race car.

Clark raced four-wheelers from 1998 to the early part of the 2000s but really didn’t have an interest in driving the dirt cars. Clark was successful at ATV cross country racing and motocross but wanted to get back into round track dirt racing, especially after a hard crash at a motocross race left him with a broken arm and injured shoulder.

He helped Clyde Overholt for a period of time as well and then he decided to purchase his own modified street car after a friendly argument with friend Robbie Buchanan. The two had long been talking about how hard it was to win in the Modified Street class at Tazewell, and Clark wanted to compete with his friends; therefore, he began his DMC racing program.

It wasn’t as quick to master as Clark had thought, but to be out there racing with the likes of Buchanan, Brad Davis and the late Chris Collinsworth was a dream of his. To be out there on the track competing with his friends was what he longed for.

“To me, racing is all about having a good time with friends,” said Clark.

He credits a lot of people in helping him along the way including his mother Rose Ann, daughter Katelyn, Clyde, Robbie, Brad, Chase King, Wade Dearing, Chris, Cody Noah, Wayne, Samantha Gray and others.

His green No. 13 Hulk car is a revolt against everything the sport deems unlucky.

“I always have run No. 1 on my car, but last year we had a great car capable of winning lots of races but everything and I mean everything went wrong. So, I decided to use the green 13 as my number this year to hopefully change my luck. Green at the track supposed to be bad luck as well as the number 13, but after last year I wanted a change so we tried breaking our bad luck by using those superstitions to our advantage,” said Clark.

His five-year goal is plain and simple — to still be racing and to be competitive but most of all he wants to be having fun.

Racing for some is a serious thing but others take pleasure from the friends made along the way. David Clark is a mix of both as he loves to compete against his friends, but it is more about the enjoyment of the sport. He would prefer to sit back with friends watching someone else drive his car, but for now he is behind the wheel of a very capable race car and loving it all.

To have his daughter alongside for the ride is a blessing to him and he cherishes every single moment.

When asked if he wanted to say anything to those that have helped him along the way Clark said, “I’d like to say thanks to everyone that comes out and supports us on a weekly basis. I’d like to urge everyone to come out and support your local dirt tracks.”

David Clark cherishes family, friends and the time spent together around the sport he loves and having his daughter helping turn wrenches and chase dreams is ideal to him.