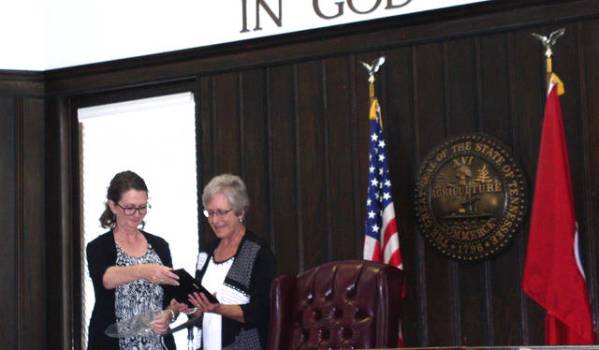 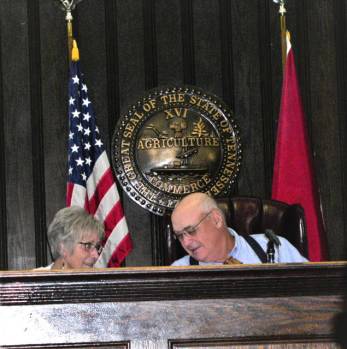 Evelyn Hill will be saying goodbye on Aug. 31, after serving 36 years as the Claiborne County Court Clerk. A retirement party was held inside the large courtroom of the Claiborne Courthouse on Thursday to honor her many years of service.

Hill spent a couple of hours greeting the steady flow of well-wishers, reminiscing and pausing for individual photos with friends and associates.

Co-worker Karen Hurst struggled to hold back tears as she read what was inscribed upon the plaque of appreciation presented to Hill during the opening moments of the celebration.

“…Her unwavering dedication to the duties that she incurred in September of 1982, as she was sworn in as county clerk have been demonstrated each and every day. We honor her today as she has served with diligence, those official duties, and as a friend to the people of this county,” said Hurst.

Hill began her professional career at the age of 21, as the secretary for then county judge (county mayor) Bill Hurst. In those days, that office handled a large chunk of county business including payroll, drafting meeting agendas and paying bills.

She remained in that position for nearly five years.

The birth of her second child was the deciding factor to stay home and care for her little one.

“I figured I’d spend a few years at home, but it didn’t quite work out that way,” said Hill.

Within the year, she was back at her old job, “filling in” as secretary until Hurst could secure a permanent one.

In 1978, Hill was bitten by the campaign bug. The office of county clerk was up for election, and she decided to run for it. Hill was defeated, however, coming in just a couple hundred votes shy of beating the incumbent.

Four years later, she ran again. This time, she handily won the election by a couple thousand votes.

“I’ve been very fortunate in that I’ve never had anyone run against me, since 1982,” said Hill.

A county court clerk must be a “jack-of-all-trades.” The office maintains not only all county business but is also connected with every state department. The county clerk handles everything from marriage, game/fish, drivers’ and business licenses to drafting and the follow up paperwork for all local oaths of office.

This hefty business is conducted with just seven employees and very limited space in which to perform those duties.

Hill credits her professional longevity to her certain love for people and for trying to help anyone who might cross her path.

“The people of this county have been good to me and, in turn, I’ve tried to be good to them,” said Hill.

When asked her reasons for retiring, she said, “its time.”

With no specific future plans in mind, Hill says she will take each day as it comes and “tie up a few loose ends.”