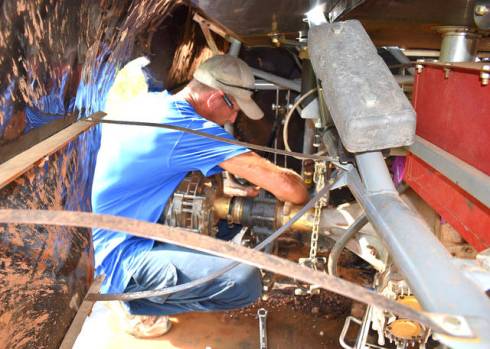 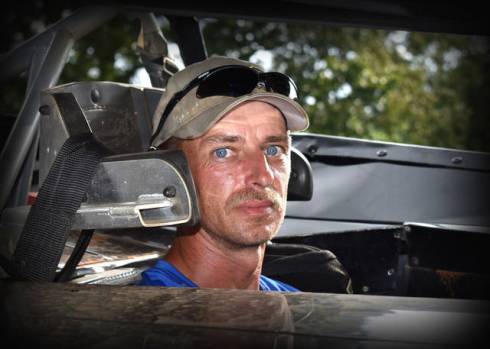 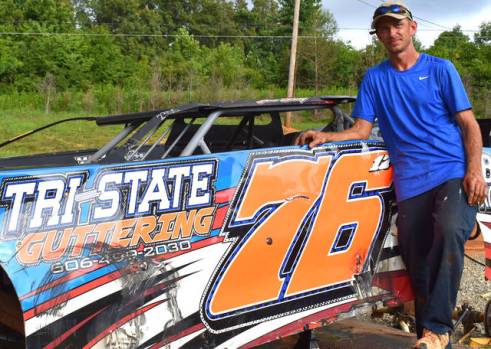 <p>Allen Earl | Claiborne Progress</p> <p>Bray stands beside his No. 76, which holds a tribute to his father’s 17 in the right corner.</p>

Joe Bray (37) epitomizes the theme of the series. He is an up-and-coming driver that is working hard to learn the in-and-outs of dirt late model racing. As a beginner, he is constantly listening to other drivers to become better.

Bray, like many other drivers, grew up at the race track watching his dad and others throw the cars into the clay high banks of Tazewell Speedway. He caught the racing bug at an early age and has recently got back into the racing scene after a brief hiatus in Michigan.

Bray learned much from his seven-time championship winning father and thought he would give it a shot as a 14-year-old. The first race car was a Chevrolet Monte Carlo and the result was less than impressive according to him.

“That first time out there went terribly horrible and bad,” he said.

Bray never found the results he desired in that car. After moving away, he came back home but when his father got out of racing it was his time to get in.

Bray began racing this time in a Rocket chassis. Helping him get back in a car was his family consisting of wife Nicole and two daughters Kaitlyn and Lauren along with Clyde Overholt.

“I want to express how much gratitude I have for Clyde because he has helped me so very much,” Bray said.

When it comes to racing in the late model division behind a 602-crate motor, Bray gets excited.

“The adrenaline and speed is great out there on the track, but when you are doing it alongside those that you admire like Clyde and Jonathan Miracle it makes it even more special,” said Bray.

His best moment in racing occurred while running in the top five at Volunteer Speedway.

“I always hear other drivers speak of how easy it is to drive the car when the setup is working, and that night mine was. It was special, the car was working so good that I just enjoyed the ride,” said Bray.

In five years, he wants to still be running but at a more consistent basis and to be competing for wins. The ultimate long-term goal is become a winning driver who is known by his peers as a hard racer but still a very respectful one to his competitors.

Bray would like to thank his father Leonard, Clyde Overholt, Jonathan Miracle, Brian Towe, Josh Fields, Jed Emert and others.

The sponsors on the side of this season’s car are Bray Roofing, Tri-State Guttering and A-1 Food Mart. His power plant is by Phantom.

“I’d like to thank my family for all their work because if it wasn’t for them I couldn’t do this. I want them to know and understand that all of their work doesn’t go unnoticed. Also, I want to thank all the drivers that gave me advice,” said Bray.

When it comes to giving advice to a beginner Bray added, “Be sure to take time and listen to the other drivers and take their advice. Take time to soak in the information that they provide.”

Joe Bray recently came off a bad weekend at the track admittedly created by his own over driving and he knows that making those mistakes are sometimes a main part of turning wrenches and chasing dreams.