Former UK running back to coach at Univ. of the Cumberlands 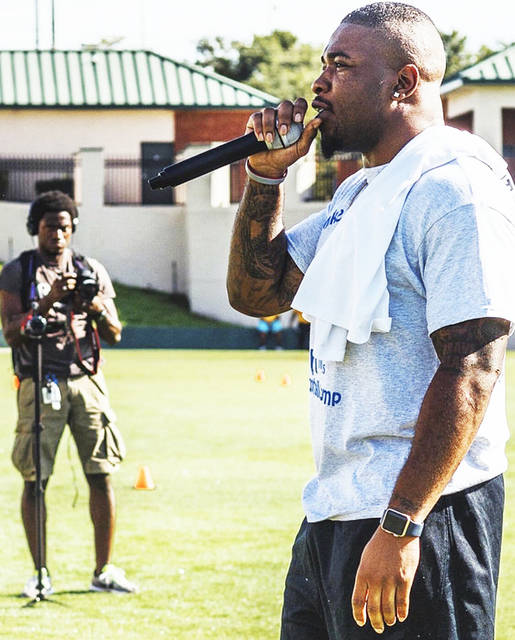 Jojo Kemp tweeted the above photo from his Twitter account @JoKempIII at 10:40 a.m. Tuesday and posted, “Sometimes it’s the journey that teaches you a lot about your destination; I’m going to continue to inspire you. I thank all my role models!!”

WILLIAMSBURG — His days of playing football may be over but he isn’t quite done with football just yet.

Former University of Kentucky running back Jojo Kemp has been named the wide receivers coach at the University of the Cumberlands.

Kemp, who played for the University of Kentucky from 2013 to 2016, initially pursued a career in the NFL but after being released from the Tampa Bay Buccaneers, Kemp made the decision not to pursue a football career overseas.

University of the Cumberlands head football coach Matt Rhymer said Maggard got in touch him about an opening on the Patriots coaching staff and Kemp was offered the job as wide receivers coach in early July. Rhymer said the coaching staff wanted to allow Kemp time to get settled in before making an official announcement.

Kemp, who will be a graduate assistant for the team while also pursuing his MBA, said he was excited to begin his coaching career at the University of the Cumberlands.

“I’m fresh off the field, so I can kind of relate to some of those guys a lot,” he said. “I’m just here to bring that energy and everything that I’ve learned along the way. I want to pass that same mindset down.”

Kemp hopes to create his own coaching style by bringing in things he has learned throughout his football career and from his former coaches.

“I had a lot of great coaches in my career, so I just want to emanate them and just be the best coach and best role model I can be,” he said. “I just want to win and make a difference in the community, the coaches, the players — I want to be a great asset to this team.”

And Rhymer believes Kemp will be a “great asset” for the Patriots football team and believes that he will be helpful in the recruiting process.

“He’s very knowledgeable of the game,” said Rhymer. “He played football at a very high level in the Southeastern Conference. He was a great player at Kentucky — he’s a great leader, very passionate player and I think that will translate into his ability to coach.”

“We’re excited about the energy around our football program and adding Jojo is another positive step,” said University of the Cumberlands Athletic Director Chris Kraftick.

Kemp said this was just the beginning of his coaching career, as he has dreams of someday being an athletic director.

“I couldn’t be in a better position than I am now,” said Kemp. “You’ve got to crawl before you can walk — that’s one thing I’ve learned, so I’m excited to begin this new journey.”