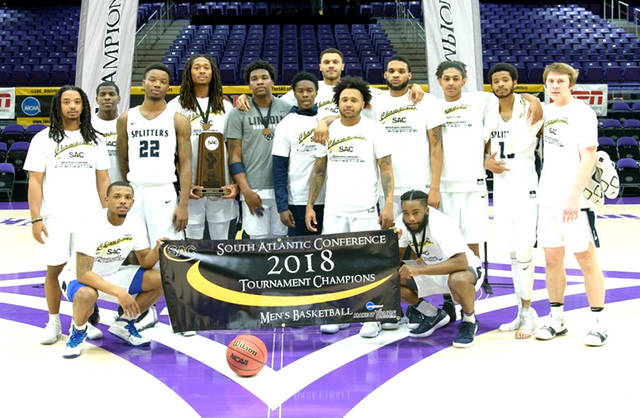 The LMU men’s basketball team has released its schedule for the 2018-19 season. It includes an exhibition against Auburn before the regular season starts on Nov. 9.

HARROGATE, Tenn. – The six-time defending South Atlantic Conference champion Lincoln Memorial University men’s basketball team has announced its schedule for the upcoming 2018-19 campaign, which features 28 regular-season games. The Railsplitters are set to host 14 of those 28 games at Tex Turner Arena.

For the second year in a row, the Railsplitters will open the season with an exhibition against a quality Division I opponent when they pay a visit to the Auburn Tigers on Nov. 2.

After stumbling to a 7-11 mark in Southeastern Conference play two seasons ago, Auburn had a resurgent 2017-18 campaign under head coach Bruce Pearl, posting a 26-8 overall record with a 13-5 mark against SEC foes. The Tigers earned an at-large bid to the NCAA tournament and defeated College of Charleston in the opening round.

Lincoln Memorial aims for a repeat of last year’s exhibition performance at Butler, when the Railsplitters nearly pulled off a stunning upset in an 86-79 loss at Hinkle Fieldhouse.

The Railsplitters commence the regular season in Aiken, South Carolina at the SAC vs. Peach Belt Conference Challenge, where they battle Clayton State in a rematch of last season’s Southeast Regional semifinal game on Nov. 9 before turning around to face host USC Aiken on Nov. 10.

USC Aiken is just four years removed from winning the Southeast Region title and making an appearance in the national semifinals.

After that South Carolina swing, the Railsplitters face another difficult nonconference test on Nov. 17 when they make the cross-state trip to Memphis, Tennessee to square off against Christian Brothers. The Buccaneers went 21-9 last season and were ranked in both national polls for most the year.

Before SAC play starts, the Railsplitters have two more nonconference matchups with the Tex Turner Arena opener against Paine on Nov. 20 and a visit to future SAC member Virginia-Wise on Nov. 24.

Several highly-anticipated matchups kick off the South Atlantic Conference schedule for the Railsplitters in 2018-19.

Lincoln Memorial opens league action at home against Carson-Newman on Nov. 28 and Coker on Dec. 1 before traveling to Charlotte, North Carolina on Dec. 8 for the first of two regular-season showdowns against Queens.

The Railsplitters won the first three, but the Royals got the last laugh by dethroning LMU in the region championship game to earn a bid to the Elite Eight.

The Railsplitters and Royals have played at least four times in each of the last two seasons, while both teams were ranked in the top 10 of the national poll in all four matchups during the 2017-18 campaign, including a rare No. 1 vs. No. 2 showdown in the regular-season finale.

Carson-Newman, meanwhile, went 23-8 last season and earned an at-large bid to the NCAA tournament. The Railsplitters and Eagles will collide for the 208th and 209th time during the 2018-19 regular-season slate.

The Railsplitters head to Anderson on Dec. 12 and return to Tex Turner on Dec. 15 to face Wingate before finishing up the 2018 portion of the schedule with a nonconference game at home against Kentucky Wesleyan on Dec. 19.

Kentucky Wesleyan had a forgettable 2017-18 season, finishing 15-16 overall, but the Panthers have won an NCAA Division II record eight national titles. Plus, they are just one season removed from posting a dazzling 28-3 mark in 2016-17.

After breaking for the holidays, the Railsplitters resume play with a New Year’s Day clash against North Greenville and a SAC contest against Newberry, both of which will be hosted in Harrogate.

Newberry was solid last season, finishing tied for fifth in the SAC with a 15-14 overall record.

The Railsplitters will play eight of their last 15 games on the road, beginning with back-to-back games at Catawba on Jan. 12 and Mars Hill on Jan. 16.

After a short two-game homestand against Lenoir-Rhyne on Jan. 19 and Tusculum on Jan. 23, Lincoln Memorial begins the second half of SAC play with trips to Coker and Carson-Newman to close out the month of January.

Feb. 2 looms large on the calendar, as the Railsplitters return home for the second matchup against Queens to start a stretch of three of four at Tex Turner. That run ends with the final nonconference game of the season against Hiwassee on Feb. 13.

The Railsplitters then wrap up the regular season with a road trip to Newberry on Feb. 16, home games against Mars Hill on Feb. 20 and Catawba on Feb. 23, and back-to-back road trips to Tusculum on Feb. 27 and Lenoir-Rhyne on March 2.

The top eight teams in the final conference standings earn bids to the South Atlantic Conference Championship, which opens with quarterfinal round action on March 6. The top four seeds will host their respective quarterfinal round game, while the semifinals and title games are set to be hosted at Furman University’s Timmons Arena.

NCAA tournament play starts the week after the SAC Championship. The winners of the SAC, Peach Belt Conference and Conference Carolinas tournaments will earn automatic bids while five additional at-large entries will comprise the Southeast Regional field. The winner of that eight-team tournament will then advance to the NCAA Division II Elite Eight.

Single-game tickets will be available for purchase for $5 at the ticket office an hour prior to each game, but there are several other ticket options available for Railsplitter basketball fans.

Season tickets are also available for the 2018-19 basketball seasons. Pricing is $75 for a single seat in the lower level of Tex Turner Arena, $250 for a package of four seats and $150 for courtside seating.