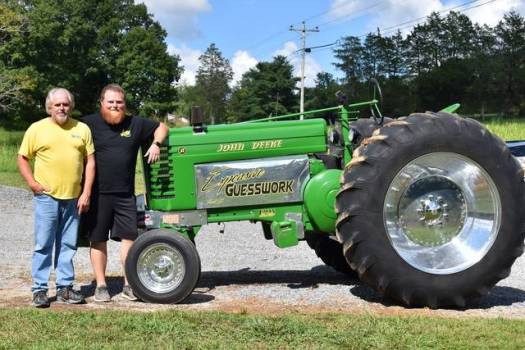 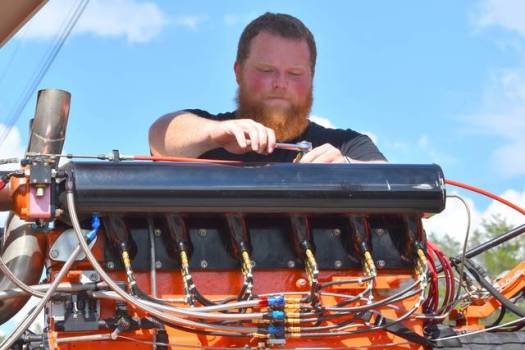 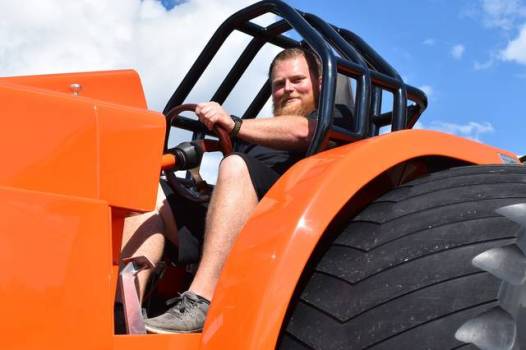 <p>Allen Earl | Claiborne Progress</p> <p>Corbin Lester sits in a well built cage behind the wheel of his alcohol fueled beast of a tractor.</p>

Motor sports cover a wide range of vehicles including planes, boats and even tractors. Many don’t think that a pulling tractor fits in the category but it completely does. Just imagine 1,200 foot pounds of torque, 1,000 horsepower traveling 35 miles per hour. Now put a sled behind it weighing 50,000 pounds. This is exactly what Corbin Lester does. He rides the beast and tries to keep the sled moving.

It all started for Lester innocently enough as a kid on a farm. He learned to drive a tractor while helping out on Lester Family Farms, and his family guided him directly into tractor pulling. Several generations of Lesters have climbed aboard those antique tractors at various pulls throughout the East Tennessee area.

Corbin is the son of Jerry Lester, and tractor pulling is a passion. What started with a 1951 John Deere-A back in 2004 at the Claiborne County Fair with a second place trophy evolved into a new build. The family turned a 1947 John Deere-A into a well-known tractor in this area named Expensive Guesswork.

This tractor was introduced in 2008 at the Grainger County Tomato Festival pull and didn’t immediately live up to expectations due to a problem with a distributor.

“That first time out wasn’t a good day at all. We realized that we had lots of problems and bugs to work out,” said Lester.

During the next pull, the bad luck was not quite done with the tractor as they had to borrow a rotor button to load the tractor back in the trailer for the return trip home.

They decided to take the tractor to some larger pulls all over the east side of the nation and even pulled in the Baddest Antique Tractor in the World event in Owensboro, Kentucky. The team failed to do what they were capable of due to an unruly carburetor. The pull was broadcast on NBC Sports.

Lester took the tractor to Tunica, Mississippi and was able to get a second place, but they wanted to try something new. Expensive Guesswork is enjoyable to Lester, but they wanted to pull something bigger, stronger and faster. They purchased a light limited super stock tractor entitled “Lil Mule” and began the learning process of an alcohol fueled, turbo engine beast of a tractor.

“We have a lot of learning to do with this tractor, but we are having fun trying. Thirty miles per hour doesn’t seem fast but when 50,000 pounds are hooked to you it’s fast enough,” said Lester.

The 200 Allis Chalmers was purchased from a pulling friend, Cliff Atkins, from Thorn Hill, and Lester has a five-year goal of being able to compete and win in the Middle Tennessee Pullers Association traveling series.

When asked about what his favorite moment was in pulling Corbin said, “I think my favorite was the St. Jude’s pull in Eagleville, Tennessee. It was a benefit pull and when I won I gave back the purse to St. Jude. Pulling is often based around a worthwhile cause.

“The worst memory happened at a pull at Cherokee High School. I really thought I had blown the engine, but instead it was a plug where the fan shaft used to be that was leaking. I dodged a bullet.”

He has had a few sponsors over the years including Jason Parrish NAPA, OT’s Body Shop, Lester’s Farms and Lester’s Fabrication.

“I’d like to see more young people come into the sport especially when it comes to fund raising pulls. It really is a family-oriented sport as seen by five generations of Lester being involved,” said Lester.

Corbin Lester and the Lester family are constantly turning wrenches in their machine shop and chasing dreams in front of the sled.