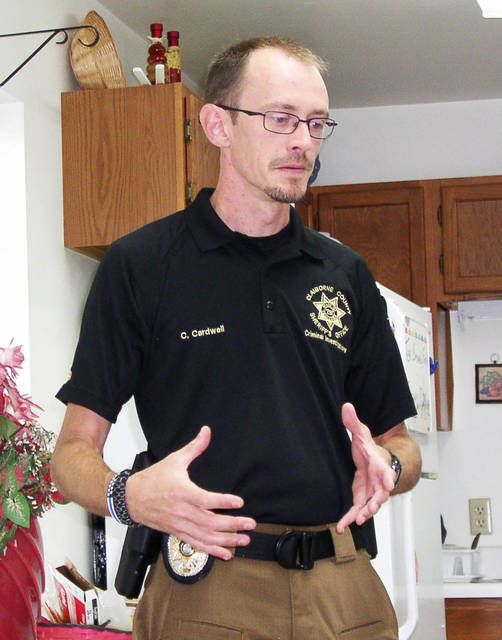 CCSO detective Chris Cardwell spends a good deal of his morning talking to employees of the Claiborne Progress about safety and the drug crisis.

Claiborne Sheriff’s detective Chris Cardwell spent a significant amount of time last week, talking about how to better secure the safety of those who work at the Claiborne Progress.

School shootings have had its affect, making security a number one concern for every district across the nation. The recent shootings at the Capitol Gazette in Maryland have now forced every newspaper in the country to face the consequences of living in a “different” society from which most of its populace was raised.

Shortened tempers and the need for instant gratification seem to have taken its toll on the United States, leaving in its wake a country of angry individuals who don’t mind expressing their rage with a gun.

Cardwell gave the Progress employees pointers on upping safety before turning to arguably one of the most important reasons for the increased need for security – the exponential jump in drug use.

Claiborne and nearby Campbell counties are the two eastern “gateways” for illegal drug trafficking, Cardwell said during his talk.

“We don’t see labs anymore. The typical “shake and bake” labs – they’re hard to do and more expensive. You can buy “Ice” for next to nothing. It’s all cartel and low-risk to the sellers,” said Cardwell.

A pipeline of illegal drugs has been created, he said, that begins in Mexico. The eastern hub moves over the border into Texas before heading north to Atlanta. From there, the drugs are trafficked north over I-75 or through the Cumberland Gap Tunnel in Claiborne County.

According to Cardwell, Ice – a purer form of methamphetamine – is the newest drug of choice in our area. The product is manufactured in huge vats in Mexico. The ice crystals formed during the process is broken up prior to distribution.

“Meth messes with your dopamines and serotonin levels. When you’re blasting methamphetamines, you’re having a different reaction from most other drugs. When you start to slam those receptors, you lend yourself to psychosis. Paranoia sets in, and your sleep cycle is disrupted. Your mood swings from happy to sad and back again.

“It’s rare to see a pill addict, today. They’re usually fresh in the game. An addict needs a lot of pills, and they’re expensive. You wind up stealing a lot of stuff to provide for that habit,” said Cardwell.

The only “positive” from the switch in substances, he says, is the marked reduction in thefts and burglaries.

“It doesn’t cost as much to get high,” said Cardwell.

He spoke of the tragic death of a law enforcement officer who accidentally overdosed during a routine traffic stop. Apparently, the transporter thought to hide his illegal stash by ripping open the bag of drugs and scattering it along the carpet on the floor of the vehicle. During his search, the officer’s hand inadvertently came into contact with the substance.

Not thinking, he reached for his hand sanitizer, which is alcohol-based. Alcohol works as a dilator, opening the pores of the skin. The officer was “hit” with an instant, lethal dose of the drug.

“A tiny amount can be lethal. Just the amount equal to two grains of salt can kill you,” said Cardwell.

Fentanyl, a synthetic opioid manufactured for use as a tranquilizer or sedative, is 10,000 times more powerful than morphine. Fentanyl is an aggressive substance and does its damage by tenaciously reattaching itself to the brain receptors. The usual one dose application of Narcan, created to counteract the effects of drug overdoses, is useless in combating Fentanyl.

It takes 10 to 15 hits with Narcan, Cardwell said, to combat the drug while awaiting the arrival of emergency help.

“The biggest threat is in breathing Fentanyl. The problem is, you can’t control the amount of Fentanyl in each pill,” said Cardwell.

One of the newest “hooks” used in the illegal drug trade is the lacing of child-appropriate products like gummy bears or children’s vitamins. Cardwell says this practice has not yet caught on in this area. However, parents should be aware and take precautions.

As for safety, he recommends that everyone be more cognizant of his or her surroundings and says that the use of surveillance cameras is a great idea.

“They are very inexpensive, now. For just $150, you can get a closed-circuit one,” said Cardwell.

He says the times have changed.

He agrees that every company should have an emergency action plan.

“Always remember, you guys are in control of your situation regardless of what the company policy says. It may say ‘hide behind furniture.’ That’s all well and good. But, if you had a chance to stop a threat, you need to use any means necessary. There is no reason somebody should die because of trying to follow a policy,” said Cardwell.

He addressed the mass shootings.

The majority of people tend to cower as the “fight, flight and freeze” chemicals shut down the brain, he said.

“If an opportunity arises to band together and fight the intruder, I recommend you do so and take that person down. The shooter is coming into an unknown situation with noise and lights and people. He’s under stress and has tunnel vision. Hopefully you and others joining in would be able to get into a position to overpower him.

“If you start screaming and hiding, you’re doing the worst possible thing you can do. In the 1960s, everybody volunteered to protect family, friends and neighbors. Today, it’s ‘me, me, me’ or ‘I don’t want to get hurt.’ In that reality, there’s going to be a body count,” said Cardwell.

Although mass shootings are getting “the press” these days, he says that the majority of attacks are now done with knives and hammers.

Cardwell has done over 100 security trainings within the last half-year or so. He is available, by appointment, within any setting whether a church, school, business or organization.