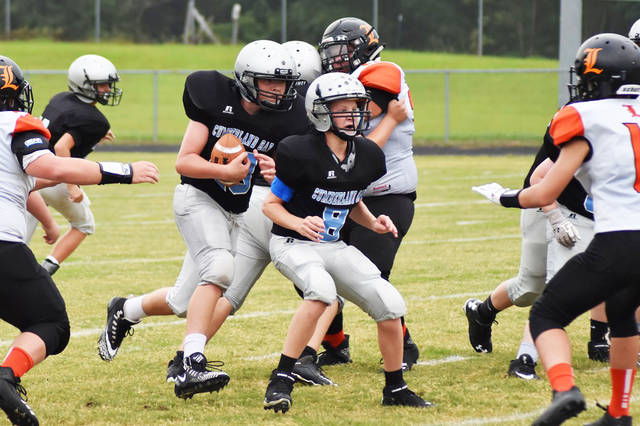 Panther Jonah Ellison (8) leads Colby Isbell (48) through a hole on a kickoff return.

The Panthers brought the team out on the field with five returning eighth-graders and a bunch of youth. This fact had Coach Ben Owens filled with a lot of anticipation but concern at the same time.

“We have skilled players, great athletes but not a lot of experience.”

Not being able to see their opponent on film before the game was difficult, but the Panthers knew that they could count on a single thing to get a win.

“I told the team that it comes down to one thing, effort. I hate to put it in a single word but that’s it. If we put out the effort, we will be fine,” said Owens.

The Panthers received the opening kick but quickly turned it over on downs. At the 2:26 mark, the Owls scored their first TD and the conversion try was good to lead 8-0.

The Panthers then fumbled the ball back to the Owls at 2:12 in the first. With 36 secs left in first, the Owls scored their second TD and conversion was good extending the lead to 16-0.

Cumberland Gap again turned the ball over on downs with just under seven minutes. They scored their first second quarter TD at 4:43 and then ran in the conversion to lead 24-0.

Good field position had the Panthers with a great chance get on the board but two negative plays created a bad situation that the Panthers could not overcome. The Owls added a late first half TD after the Panthers defense forced a fourth and four. The conversion pass was intercepted leaving the score at 30-0 ending the opening half.

The Owls got the ball to start the second half, and just a minute into the third quarter the Owls added another score and led 38-0 after the conversion was ran in.

The Panthers punted on the next possession after having one of their longest runs of the game. The third period ended with the Owls driving and leading 38-0.

Just when the Panthers looked to have something going in the fourth quarter on offense, a fumble gave the ball back to the Owls. Gavin Owens then scored for the Panthers on a pick-six, and the Panthers were on the board. The conversion was good and the score was 38-8 with 3:25 left.

Braden Ellison looked to have the Panthers defense second pick-six of the game at 1:33, but it was called back due to penalty. Colby Isabel scored at 1:22 and the score was now 38-16 and that represented the final score of the game.