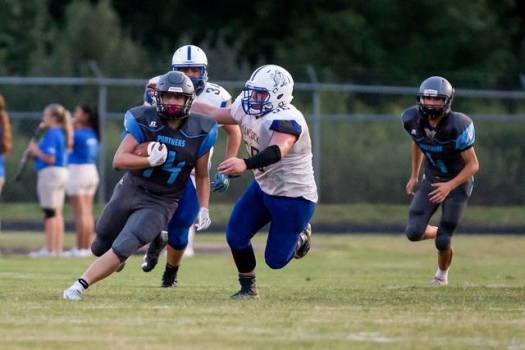 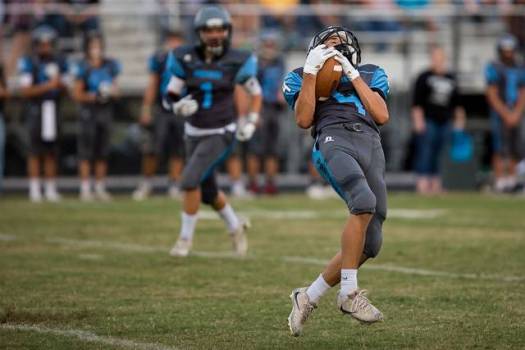 Cumberland Gap welcomed Hancock County into the land of the Panthers for battle on the gridiron on Aug. 24.

Hancock received the opening kickoff but failed to do anything with it. The Panthers’ Logan Miracle on the other hand began the scoring with an 8-yard run, but the point after was missed. The Panthers defense came in and kept a good running back from creating havoc.

On the offensive side of things, Caden Brunsma hit Caleb Edwards for a 22-yard TD pass with 11:26 to go in the second quarter, but again the point after was no good. They had another scoring opportunity with under 30 seconds to go in the first half; however, they turned the ball over on downs and went to the halftime break leading 12-0.

Coming out of the break, the Panthers struck again, this time at 6:14 in the third period when Brunsma hit Holden McDaniel for a 9-yard score. This time Ethan Ramsey kicked the point after through the uprights making the score 19-0.

Nate Fuson broke into the end zone with 3:02 remaining in the third quarter, and Ramsey was true in the point after running the Panthers’ total out to 26-0.

Cumberland Gap smothered out the potent rushing attack of the Indians and took the victory 26-0.

Caden Brunsma spoke of the difference in play from last week to this week.

“We had a great week of practice, practice, practice. Everyone came in this week and worked hard for over two hours a day. Tonight, I was able to see what the corners and safeties were doing with their schemes,” said Brunsma. “The line protected well, so I was able to hang in the pocket longer. When there was a breakdown I was able to run up the middle for five to eight yards. My receivers ran great routes.”

Coach Cline had this to say, “Our guys worked hard this week and really did a great job in the second half tonight. We came out flat at first, and we have to get over that type of play. We had no energy and, regardless of the score, we have to pick it up. We have a lot of new skill guys, and they executed better tonight than last week.

“Brunsma did a lot better this week of stepping up in the pocket instead of stepping out of it like last week, and it showed in his play. The line really showed up this week. We have a great bunch of receivers. It’s just getting them all to play together. Our kids are a great group, and they want to get better.”

When asked about Meigs County coming in next week Cline said, “I look for them to come in the number one team in 2A and have maybe the best QB in the state as a junior. Last year, they beat us 41-6. They did not sub the entire game. They only outscored us 13-6 in the 2nd half, so we know we can compete with them. We have to come out from the opening kickoff and play.”

The Panthers defense will have to stop a great offense that is currently averaging 51 points per game.