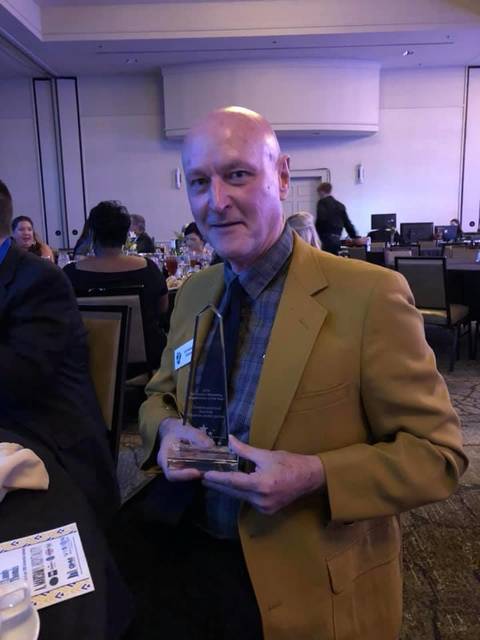 Carl Nichols, president and CEO of the Cumberland Gap Region Tourism Association, is shown with his award designating the nonprofit as the 2018 Destination Marketing Organization of the Year. The honor was bestowed by the Tennessee Hospitality & Tourism Association.

The Tennessee Hospitality & Tourism Association recently held its 32nd annual ‘Stars of the Industry Gala’ in which a locally-established nonprofit was honored.

The Cumberland Gap Region Tourism Association (CGRTA) received the 2018 Destination Marketing Organization of the Year Award during a banquet held at the Marriott Convention Center in Kingsport.

“In only 28 months, our association has advanced from a stumbling beginning to a rising star of the industry,” said Carl Nichols, president and CEO of the CGRTA.

“I’m speechless. To have been chosen from among the numerous marketing organizations from across the state, to receive this most prestigious award – I’m in awe.”

Nichols says that, when he received the email notifying him that the CGRTA had won, he actually thought it was a mistake.

“I even had Carla (the CGRTA executive assistant) call to verify that it was true. Now that we have it, I could not be more proud,” said Nichols.

He says he feels the association had a “very disorganized beginning.”

“The first six months were wasted with trying to find our bearings. Once we did, we have managed to accomplish most of our initial goals. We are now setting course to achieve our ultimate goal – that of making the Cumberland Gap region a vacation destination,” said Nichols.

One of those first goals that were achieved, he says, was the organization of the 16 member board of directors, representing all 10 counties in the region.

“Every board member is involved with the tourism industry in their county, state or region. These professionals play a major advisory role in the development and advancement of the association,” said Nichols.

One of the first partnerships, he says, was with Southeast Kentucky Technical and Community College through its ‘Selling to the World’ program. The CGRTA worked with the program director, Jeannie Allen, to host the initial meetings in Harlan, Pennington Gap, Harrogate, New Tazewell, Middlesboro, and Pineville.

The programs in Harlan and Pennington Gap have been a huge success and are making a positive impact on those local economies. The cooperation from the individual cities, local merchants and the initial attendees has made the difference, he said.

The other locations meet on the campus of Southeast Community College. They, too, are progressing toward becoming worldwide entrepreneurs, according to Nichols.

He says the partnership with SOAR (Shaping Our Appalachian Region) is invaluable. The executive staff recently attended the SOAR Summit in Pikeville, Kentucky. There, they saw firsthand the phenomenal work this organization is doing in order to bring hope and prosperity to the Eastern Kentucky Appalachian Region. SOAR is reshaping this former coal region and retraining former coal miners in the fields of industrial and automotive engineering, manufacturing, computer technology, medical technology and tourism development.

During the summit, over $100 million dollars in grants were awarded from the state and federal governments to advance technology and industry, and introducing broadband into every mountain and valley in eastern Kentucky.

The SOAR board of directors is headed by U.S. congressman Hal Rogers, the current and two former Kentucky governors.

During the past two years, the executive staff has built relationships with communities by visiting and speaking to numerous Chambers of Commerce, tourism boards, community organizations, merchants associations, city councils, and small businesses throughout the region.

Nichols says the CGRTA does not plan to ‘sit on its laurels.’ The association has ambitious short and long-term plans for achieving its mission to promote the Cumberland Gap region as a vacation destination and to increase tourism traffic and spending.

“It is a continuous process. It’s a large region. We cannot get to everyone, all at once. I have several upcoming speaking engagements. Eventually, I will have traveled to every community in the region.

“Many small businesses in our ten county region struggle from day to day to stay open. However, with the increased flow of tourists and tourism dollars, small businesses in the region are poised to reap the bounty created by a stronger local economy,” said Nichols.

The Cumberland Gap Region Tourism Association serves the ten counties within a twenty-five mile radius of the Historic Cumberland Gap. These counties are in the states of Tennessee, Kentucky, and Virginia.

Nichols says that, to his knowledge, the CGRTA is the only tourism organization in the country that works in three states.

The daily task of the CGRTA, he says, is to make history, natural beauty, art, music, adventure and the Appalachian experience come alive by making the Cumberland Gap region a destination that tourists will ‘drive to … not drive through.’

Nichols says that everyone can play a part in making this happen. One way is by emailing the association and requesting to be added to the weekly newsletter. The email address is: cgrta @yahoo.com.

Stay informed, he says, of the upcoming events in the region and share the calendar of events with Facebook friends and family.

“You can help the association spread the news that the Cumberland Gap Region ‘has it all,’” said Nichols.