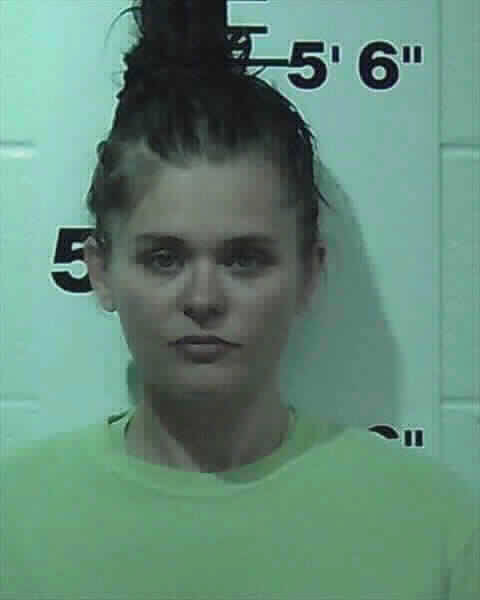 A woman reportedly on methamphetamine attempted to borrow a Tazewell police cruiser while the patrolman was busy handling the aftermath of a two-vehicle accident.

Amilia M. Dupree, 26, of Knoxville was arrested on Oct. 28 and booked into the Claiborne County Jail on one count each of the attempted theft of property over $10,000 and public intoxication.

Dupree allegedly told patrolman Jason Pabon that Jesus wanted her to take the vehicle “for her baby.” In his report, Pabon states that he asked Dupree if she had used any drugs.

“…the defendant stated that she had in fact used methamphetamine through the night,” states the report, in part.

The incident unfolded as Pabon was directing traffic along Hwy. 25E, nearby the Tazewell Motor Lodge. A female, later identified as Dupree, approached Pabon’s cruiser while he was engaged in conversation with the employees of the wrecker services. His cruiser was parked on the highway with its rear, blue directional lights flashing.

Dupree was apprehended by Pabon and is currently in jail under a $25,000 secured bond.

The wreck that eventually led to Dupree’s arrest occurred shortly after midnight on Oct. 28. The incident involved a collision between a 2012 Jeep and a Schneider tractor-trailer, contracted by Walmart.

The preliminary investigation by Tazewell Police Chief Jeremy Myers concludes that the driver of the Jeep, Abigail Ferguson, 18, was traveling northbound.

According to an eye-witness, the Jeep crossed the center line, crashing into the semi driven by Benjamin Clark, 31,who was traveling southbound in the fast lane.

Ferguson was transported by Claiborne EMS to the Helipad, where LifeStar was waiting to transport her to the University of Tennessee (U.T.) Medical Center.

Myers said, during an interview held the following day, that Ferguson was treated for a broken leg and cuts, and released from the hospital.

“It’s miraculous that she is already home,” said Myers.

Crews worked until approximately 9:30 a.m. to move the tractor-trailer off the road, so the highway could be reopened.