BOE director contract to fade away 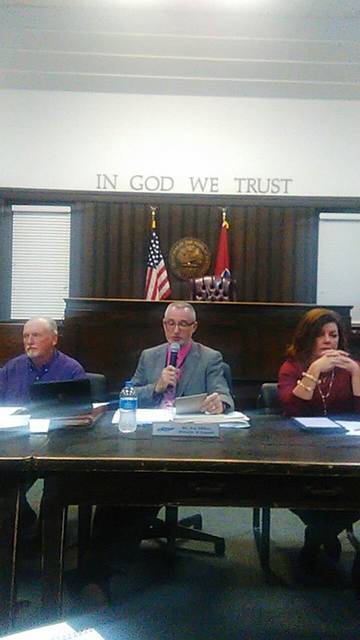 The Claiborne School Board decides not to renegotiate the contract of director of schools Dr. Joseph Miller. From the left are board chairman Wade Breeding, Miller and vice-chair Shannon England.

In a seemingly unusual move, the Claiborne School Board voted neither to review nor extend the director of schools’ contract. As it now stands, Dr. Joseph Miller will have until June 30 to clean out his desk. Miller’s contractual agreement with the school system expires on that date.

Prior to the vote, Breeding opened the floor for discussion. Miller asked to speak. He asked Cosby and Munsey, who made the initial motion and second, to explain on just what the vote was based.

Munsey declined to comment, other than to say it had been previously discussed during the last committee meeting.

One of the school board members was interviewed by phone on the morning of Nov. 11. The board member said that Miller’s recent evaluation had netted a 52 percent. The seemingly low score was due to a variety of issues. The practice of moving ‘problem’ personnel ‘up’ instead of ‘out’ was one major area for concern, the board member said.

This and other worries were broached during the evaluation, which happened during the October committee meeting.

The school board, as a whole, was apparently concerned that ‘problem’ employees were being allowed to walk away from their jobs in the Claiborne school district, without a paper trail alerting future employers of the potential for problems.

Miller had done a great job of motivating the school district. However, continued pleas to change the status quo while handling ‘problem’ employees seemed to land on deaf ears, the board member said.

During his one year at the helm of the school system, Miller seemed to bring a fresh approach to county education. His philosophy of ‘personal and professional improvement by one percent, each day’ seemed to light a fire under teachers and administration, alike.

Under his leadership, test scores made phenomenal improvements. The latest TNReady scores, alone, outshone those of other school districts across the state.

According to Meagan England, high school student science scores were in the top 10 for growth.

“There are only 20 percent of districts in the state that can claim this, and we were at the top of that list of districts taking the same assessments as us. So, that’s pretty huge. I was looking at other districts that surround us, and they were much lower. Where we had nine out of 10, they were looking more at only three or four areas. The other 80 percent only had one or two areas,” said England, during a committee meeting held a few months earlier.

Results from the Tennessee Value-Added Assessments System (TVAAS) showed highest marks earned by county students. In just one year, scores rose from a dismal Level 1 to a Level 5 – the highest score that can be achieved within district level composites.

During the school board meeting, Miller detailed the latest ACT scores.

“When you combine the composite, it went from 18.3 to 18.4. Even though that tenth (of a percentage point) seems like a small increase, there’s a lot of work that goes into moving our students into this type of growth. By the way, the state average is set at 19.6. The state goal is 21.0,” said Miller.

When the meeting adjourned, Cosby was asked to elaborate on the vote not to review nor extend Miller’s contract.

“In my opinion, he’s (Miller) not taking the school system in the right direction,” said Cosby.

Munsey could not be reached for comment, as of press time.

Miller declined to make a comment, at this time.

The Claiborne Progress continues to closely follow this story, and will have updates as more information becomes available.

In other action, the school board unanimously approved the proposal to name the Claiborne High School Gymnasium after the late Coach Carl R. Green.

Last month, the board heard from circuit court judge John McAfee and Colonel Lance Green, son of the late coach. The two men took some minutes to detail the stunning achievements made by the teams under Green’s leadership. They spoke of his deep faith in God and how Green was looked on by his team members as a ‘second father.’

The late coach spent some 27 total years leading teams to victories at CHS. During his second season in 1986, the boys’ basketball team won the first of its 17 district titles. During 12 of those seasons, Green was named District Coach of the Year by the TSSAA.

His record of excellence is unequalled in Claiborne High School history.