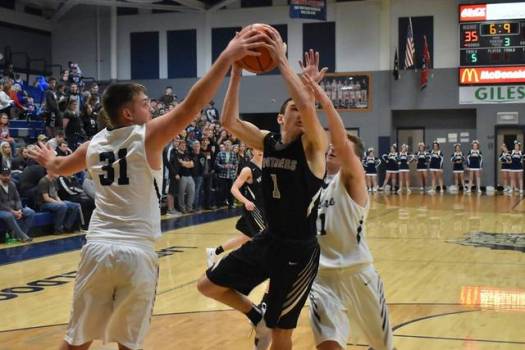 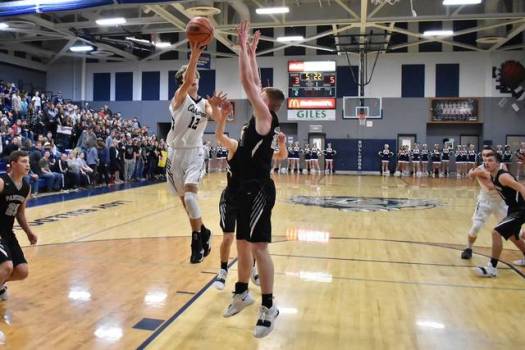 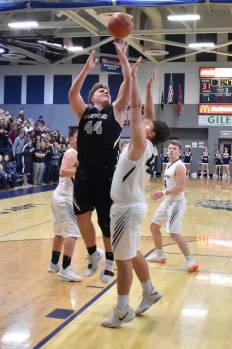 The final game of the 2018 Bulldogs versus Panthers rivalry night featured the boys, and the Claiborne fans were ready to explode but the visiting Panthers were looking to keep them silent.

Just after the tip, Nate Fuson drove to the rim and made the shot but missed the and-one. He then hit a deep three making the score 5-0. Lucas Manning responded with a three-pointer but shortly after Claiborne was hit with a technical foul. The Panthers missed the free throws, which became a theme for them for the rest of the night. Jake Templin added two quick baskets and CGHS led 9-3. Daniel Atkins hit one of two free throws pulling CHS closer at 9-4. Jacob Williams hit a short jumper and had Claiborne down by three. An Evan Jackson free throw made it 10-6 for his Panthers. Claiborne hit a three and then tied it at 10 but let the Panthers get an easy basket on the other end. The Panthers held a lead after one period of play, 12-10.

When the second period started, Jackson hit one free throw but the Panthers got the rebound following the second. Kade Beeler forced a turnover and Williams went to the stripe hitting one of two. Williams and Beeler gave the Bulldogs the lead at 17-16. Manning went to the rim for two and then Templin was fouled. Templin hit one of two but Williams matched the free throw with one of his own. The free throws just wouldn’t fall for the Panthers and the Bulldogs were making theirs. Jackson tied it at 22 but Braden Williams hit one of two free throws. Fuson continued playing well and hit a free throw that tied the game again, this time at 23. Seconds later, Fuson broke the tie and then hit a last-second shot giving the Panthers a 27-23 lead at the half.

Both teams went to the line to start the second half and the score moved out to 29-24. Manning helped to keep the Panthers from running away by hitting five fast points. The teams swapped baskets and the score was tied at 35. Fuson broke the tie with a three-point play the old-fashioned way and after three periods the score was 38-35 with Cumberland Gap leading.

Jackson hit a basket to start the final period and Beeler was fouled and hit one free throw. Christian Whiteaker went to the rack and was fouled. The basket was good and he hit the free throw to pull CHS to within one point at 40-39. Claiborne led shortly after by one point but the fouls were adding up for both teams and it became a slower game due to free throw shooting.

Templin and Miles Cole gave the Panthers the lead at the stripe and Templin added another basket. It was 50-47 with 2:33 left and Atkins’ shot made it a one-point game again, 50-49. Cole got behind the defense for an easy basket and Whiteaker went to the stripe and hit two, 52-51. A foul was called when the Panthers tried to split a double team that upset the Panthers fans. Down by one point, Claiborne had an opportunity to go ahead. Panthers Eli Wilson hit two free throws and made the score, 54-51.

J. Williams hit a jumper with 49.7 left to narrow the gap to a single point at 54-53. Claiborne forced a turnover and had the ball with 36.3 left. Manning hit a big three giving the Bulldogs the lead back at 56-54. Beeler was then fouled and went to the stripe hitting both, making it 58-54. Jackson ripped down the court and hit a clutch shot, pulling the Panthers to within two at 58-56. The Bulldogs got the ball in the hands of a great free throw shooter in Beeler and he made both giving CHS a four-point cushion at 56-60. The Panthers were then issued an intentional foul, sending Beeler back to the stripe. Beeler hit one of two and all they had to do was inbound the ball for the win with less than a second left.

Claiborne held off a charging Panthers team to win 61-56. The Panthers missed 17 free throws while the Bulldogs missed only nine, which was a big difference in the outcome.

Leading CHS in scoring was Beeler with 20. Manning dropped in 19, J. Williams had eight and Whiteaker had seven, all in the final period. Braden Williams and Daniel Atkins combined for seven to round out the scoring. The Panthers were led by Fuson with 19. and Jackson and Templin had nine. Caden Brunsma played well and had six, Jaden Schertz scored five, Miles Cole hit four points at the end to keep his team in the game, and Alex Blevins and Eli Wilson each dropped in two.

After the game CHS Head Coach Corey McGinnis had this to say, “We played well, we fought hard and it was great to see Christian Whiteaker have a big senior season moment at the end of the game with seven points. His efforts allowed us to get the ball to Beeler when we needed to and then Kade finished it off for us. I wish we would have shared the ball more in the first half. I think we got a little selfish but we pulled it together at the end and it was a good team win.”