Two rival schools met on the hardwood Jan. 15 at Claiborne High School. First up were the Lady Bulldogs and the Lady Indians. It took overtime to settle the first meeting earlier this season, with Hancock getting the win. But the Lady Bulldogs were excited to defend their home and even the series.

Emma Beason scored the first basket of the game for the home team and then Kaylee Cox scored in the paint. Hancock was scoring as well just staying out front but Macie Sumner finally put CHS in the lead at 6-4. The game was tied at six after the first quarter.

Skylar Cook opened the second period up with a 3-pointer. The Lady Bulldogs’ defense was playing well and on the offensive end Hailey Sexton worked the paint and went to the stripe, making one of two free throws. CHS then had two ugly possessions, causing Coach Ariel Nickell to call time out to talk about it. With 1:19 remaining in the first half the game was tied at 10. With 30 seconds left, Sexton hit one of two free throws, making it 11-10 just before the half ended.

Cox drove to the rim and scored to start the third period. Jaden Thompson hit a jumper in the lane, extending the CHS lead to 15-11. Beason took the ball to the cylinder and helped CHS pull away to a 19-13 lead.

The Lady Indians rallied, adding one from the foul line to make it a 20-14 game, but CHS countered with a Beason free throw. Thompson added another free throw but CHS was leaving too many valuable points at the stripe. Thompson hit a shot from the corner and gave the Lady Bulldogs a 10-point lead, 24-14. Cox then stole the ball and hit a layup.

Trinity Jones made a 3-pointer, increasing the CHS advantage to 29-16.

Claiborne enjoyed having a 20-point lead and played loose the entirety of the final period. Hancock quickly got the CHS lead back to 10 and still had three minutes to play. The Lady Bulldogs had to win the game at the free throw line and made just enough to keep Hancock from stealing the win. The final score was 45-35.

Coach Nickell said, “We have to learn to keep our foot on the pedal and not let up. We also need to hit our free throws but overall we did enough to win “

Emma Beason led CHS with 12 points. Kaylee Cox had seven, Jaden Thompson and Skylar Cook had six each, Macie Sumner and Hailey Sexton both had five, Trinity Jones had three and Kelsy Munsey finished with one point. Leading the Lady Indians were Sarah Sutton, Lanie Dalton and Karlie Bowlin with six points each. 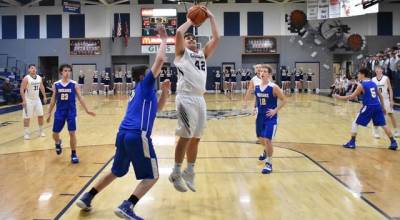