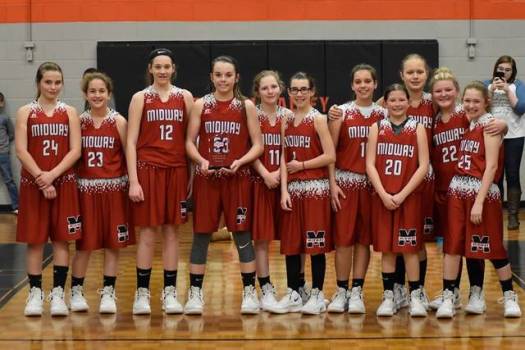 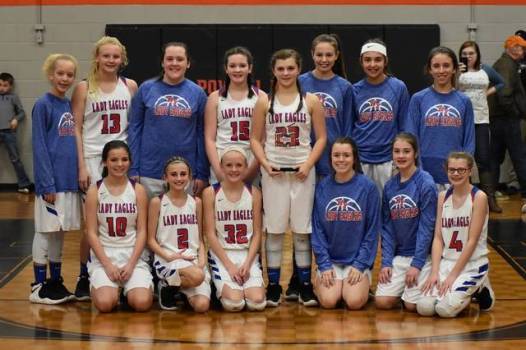 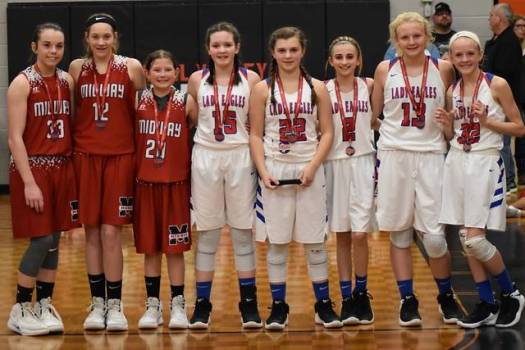 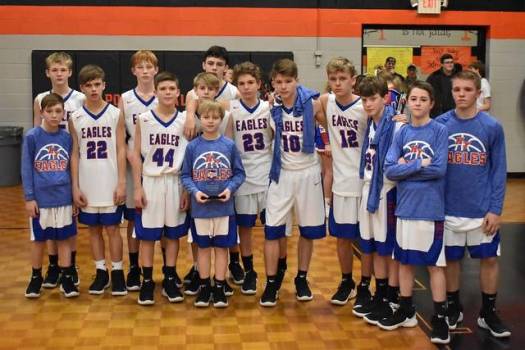 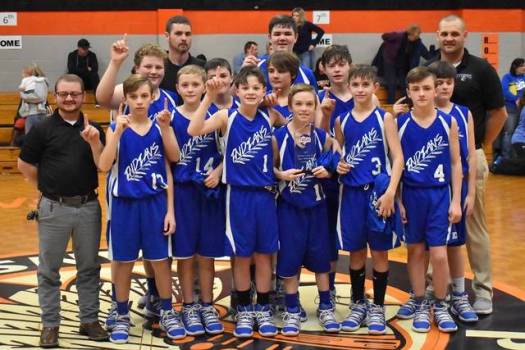 After an exciting three days of Section 2, Area 6 District Tournament basketball, only four teams remained to claim the two championships. It was a cold evening when the fans assembled in Haze Davis Gymnasium at Powell Valley Elementary School, and they were ready for two great championship games.

The first game on Jan. 24 featured the H.Y. Livesay Lady Eagles and the Midway Lady Red Devils. On paper the Lady Eagles had the edge and were the number one seed. Midway had to play its best basketball of the season to get a victory.

HY put the first points on the board and then ran out to a 6-0 lead before Midway scored. Midway’s defense shut down HY at the end of the first period and they used their defense to get easy shots on the other end and had the score down to 6-4 after one period.

To start the second, Midway pulled to within one on a free throw. HY extended its lead to 10-5. Midway scored two from the stripe to make the score 10-7. A Midway layup made the score 10-9 with 20 seconds remaining in the half. The Lady Eagles added a free throw and led at the half 11-9.

The Lady Red Devils hit the first basket in the second half, tying the game at 11. HY countered with a steal and a layup. They followed that shot up with an and-one making the score, 16-11. The Lady Eagles stepped up their defense at the end of the third and were able to lead going into the final period, 18-11. HY began the fourth period with four fast points and ran their advantage out to 22-11. The scoring slowed for both teams during the middle of the period but the Lady Red Devils needed to be scoring to draw closer to the Lady Eagles. HY was able to hold off Midway and take the district championship by the final score of 24-14.

The HY coaching staff had this to say following the game: “We’re proud of the team but moving forward we need to hit our layups and free throws. If we do that we’ll be dangerous.”

The final game of the tournament was the boys’ championship between the number one seed H.Y. Livesay and the Hancock Indians. HY started the game with a steal and a layup. The Indians responded with a basket down low. HY grabbed the lead and then Hancock tied the game and had a chance to lead. They took a 5-4 lead after an and-one free throw then added another and-one to lead 8-4. The Indians added a three-point basket to lead 11-4 and caused the Eagles to call a time out to slow it down. Hancock ruled the paint during the first period and HY was racking up the fouls trying to stop the Hancock inside attack. After one period the Indians led 14-8.

The Indians ran on out to lead by 10 at 18-8 and the Eagles needed to slow down the Indians inside game. HY rushed their shots in the second trying to avoid the “bigs”. Later in the period HY made it into the paint and scored, breaking a scoring drought that lasted around two minutes. At the half the Indians enjoyed a 16-point lead at 26-10.

Coming out of the break the Eagles got a stop and a basket, then was fouled on a layup making the score 26-14. The Indians drove inside and got another and-one. HY used defense to come back to within eight points and had the Indians frustrated. The Eagles were getting the rebounds and quickly made the move to within six points. With 1:30 left in the third Hancock held a five-point lead. At the end of three the Indians were still holding on to their lead, 32-27.

During the final period HY was still spreading the court out on offense and it was allowing easy shot attempts, but they were not falling. HY traded a two for a three and the Indians were staying just out front, 35-29. HY showed great resolve and kept getting shots up in the paint pulling to within four points at 37-33. But with 44 seconds left it was all about free throws and the Indians sank enough to pull off the upset, 40-35.

Hancock coach Matthew Green had this to say, “We played phenomenal and played hard all night. Take nothing away from Livesay, they are a great team and well coached. Moving on we need to improve on defense and slowing the ball down.”

Leading Hancock in scoring once again was Chandler Ferguson with 15. Noah Belcher had 12, Mason Wallen had eight, Will Anderson had three and Michael Hatfield had two. Leading the Eagles was Braden Ellison with 12, Seth Massengill had nine, Jake Barton and Hyrum Hinckley each had six, and Alex Douglas rounded out the scoring with two points. All-Tournament selections went to Braden Ellison, Seth Massengill, Hyrum Hinckley, Will Anderson, Mason Wallen, Noah Belcher, Michael Hatfield, and Chandler Ferguson was the MVP.

All four teams will continue to play in search of a state title.